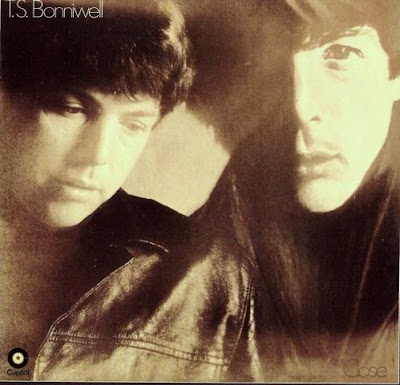 T.S. Bonniwell is the billing that Sean Bonniwell used for his only solo album, Close, released on Capitol in 1969. This might be a bit confusing to Music Machine fans, who are familiar with the name Sean Bonniwell rather than the handle T.S. Bonniwell. For it was as Sean Bonniwell that he was the singer/songwriter and chief visionary of the Music Machine, one of the finest garage-psychedelic bands of the '60s. the Music Machine's achievements and records are described more fully in their own entry. In brief, though, it can be noted that Bonniwell was by far the most important member of that group, penning their torturous but catchy riff-driven songs of psychological ecstasy and confusion, even if just one of them ("Talk Talk") became a hit. Bonniwell was also their lead singer, usually using a gripping, throaty tone that could reach hair-raising intensity, though occasionally he could switch into a surprisingly smooth if moody croon.
The original Music Machine lineup broke up as they were getting their second album together, and much of the second album and some of their final singles are primarily the work of Bonniwell, with assistance from some other musicians. Bonniwell sold the rights to the name of the Music Machine to get out of his contract with Warner Bros. He soon recorded his solo album with Vic Briggs (who'd been guitarist in the late-'60s version of the Animals) producing. The record, while it has its good points, was quite a shock, given the grinding organ-and-fuzz-guitar-helmed rock Bonniwell had been churning out with the Music Machine. Close, by contrast, was tremulous singer/songwriter pop that verged on MOR territory at times. Bonniwell forsook his raunchy vocal persona almost totally in favor of his sensitive, clear croon, perhaps in a partial retreat to his pre-Music Machine folkie days, when he'd been in the Wayfarers. Influences from lounge pop, bossa nova, and flamenco were evident in a set decorated by subdued orchestration.
For open-minded listeners, Close does have some positive attributes, particularly in the introverted-to-the-point-of-reclusion lyrics, and its sad but sweet melodies. Often Bonniwell sounds like a man whose roaring fire has dwindled down to a candle in the wind, such is the fragile and burned-out nature of songs like "Black Snow" and "Sleep." In an interview with the magazine Ugly Things, Bonniwell described it as "kind of like, if Neil Diamond did an imitation of Johnny Mathis." There were only 5,000 copies printed and it was only issued in California, which meant the record was quite rare and difficult to hear. Bonniwell was not happy with the record, and left the music business after its release. Decades later he wrote his autobiography, Talk Talk, retitled Beyond the Garage when it was revised. 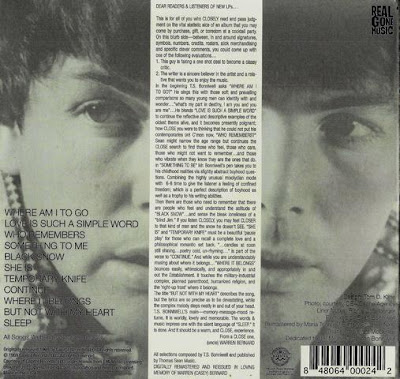 The sole solo album by ex-Music Machine leader Sean Bonniwell, using the name T.S. Bonniwell for this release, must have come as a surprise to the few people who heard it. There was none of the angst or hard garage rock associated with many of the Music Machine's finest moments. In its place was quite subdued, orchestrated singer/songwriter pop, verging on easy listening at times in its arrangements. The gravel-growl that Bonniwell employed for the likes of "Talk Talk" was totally absent, as he concentrated solely on the sweet, delicate, crooning aspects of his voice. If nothing else, his ability to switch into that voice for an entire album is a tribute to pretty astonishing vocal versatility. It's a shock, though, to hear not only him focusing almost exclusively on that vocal timbre, but also to hear him as a troubadour of moody, romantic, melancholy, and introspective songs, with plenty of touches of flamenco, bossa nova, and sweeping horns and strings. Actually this material isn't so bad, though it treads close to the saccharine at times. The melodies drift nicely in a bittersweet way, Bonniwell sounding a little like someone who's lost in a raft at sea and singing his remaining days away as he slips into oblivion. Some tracks, like "Something to Be," "Black Snow," and "Sleep" (where he lets just a little bit of the Music Machine's vocal grit peek out during the most anguished sections), are quite haunting. Just be cautioned that there's little resemblance to what Bonniwell wrote and sang for the Music Machine.