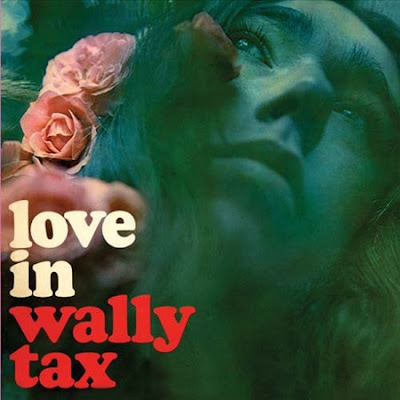 Wally Tax was one of Holland's most iconic rock & roll performers in the 1960s and ‘70s, first earning fame as the lead singer with the band the Outsiders and later making a name for himself as a solo artist and a songwriter. Wladimir Tax was born in Amsterdam on February 14, 1948; his father was Dutch, and his mother was Romany of Russian heritage. Tax claimed that he learned English from American soldiers stationed in Amsterdam, and that he used to help them pick up girls; when the first wave of rock & roll began to make itself heard in the Netherlands in the late '50s, Tax became an immediate fan, and learned to play the guitar and the harmonica. After Buddy Holly died in early 1959, Tax said he had a dream in which he saw himself starting a band that would be infused with Holly's spirit and pick up where he left off. With or without Buddy's ghostly guidance, Tax and guitarist Ronnie Splinter helped form Jimmy Revon & the Outsiders in 1960, when they were both just 12 years of age. By 1964, the combo had evolved into the Outsiders, and they made their recording debut a year later. In the mid-'60s, the Outsiders were one of Holland's most popular and innovative rock & roll acts, playing a powerful blend of rock, R&B, pop, and folk-rock, and they earned a reputation as one of the nation's wildest live bands while enjoying a string of hit records. In 1967, with the Outsiders' popularity at its peak, Tax began pursuing a solo career, producing a solo album called Love-In a year before the Outsiders released the album C.Q., widely regarded as their masterpiece. While it became an acknowledged classic years later, C.Q. was initially a commercial disappointment, and in 1969 the Outsiders broke up. Tax wasted no time starting a new band, Tax Free, with Outsiders' drummer Lendert Busch; the group traveled to New York City to record their debut album, and Tax claimed that Jimi Hendrix and Tim Hardin stopped by for jam sessions during the recording sessions. Tax Free's first and only album, featuring a mix of Dutch and American musicians, didn't fare well commercially outside of the Netherlands, and the group soon parted ways. Tax resumed his solo career, working with a number of existing bands during the '70s rather than forming a new combo of his own; his collaborators included the groups Bamboulee, Watermen, and the Mustangs. While Tax scored a number of hit singles during the 1970s, by the end of the decade his career was in a slump and he'd developed a growing addiction to alcohol, as well as an unpaid tax bill with Dutch authorities due to poor financial management. In the 1980s, Tax re-launched himself as a songwriter, penning hits for a handful for Dutch acts including Champagne and Lee Towers, but the death of his longtime girlfriend Laurie Langenbach in 1984 took a heavy toll on Tax. In 1987, Tax was invited to perform with American garage rock band The Lyres for a Dutch concert recorded for VPRO Radio (a song from the concert, "Touch," appears on the group's album A Promise Is A Promise), and in 1997 The Outsiders staged a successful reunion tour, but otherwise Tax spent most of the 1980s and ‘90s out of the spotlight and struggling with his drinking problem. Wally Tax died on April 10, 2005, and friends and admirers staged a pair of benefit concerts to cover his debts and pay for his funeral, which helped remind Dutch music fans of the depth of Tax's 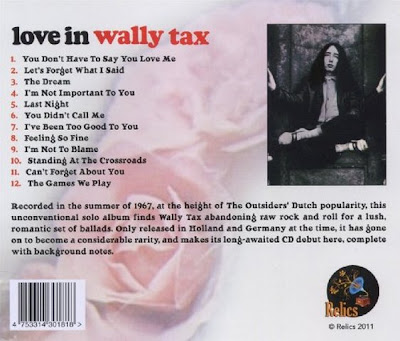 Wally Tax is justly known mostly for his work as the lead singer of the Outsiders, Holland's finest 1960s band (and indeed a good candidate for one of the finest 1960s bands to emerge from any non-English-speaking country). In 1967, while the Outsiders were still at their peak, he started a side career as a soloist who saw the release of one LP, Love-In, as well as a couple of non-LP singles. Love-In is a curious, uneven affair, not least because the Outsiders were known for pretty raw, almost punky hybrids of British Invasion R&B, pop, and folk-rock, paced by Tax's oft-raunchy vocals. By contrast, Love-In is a gentle, orchestrated pop album that showed a much more subdued, poppy side to Tax's singing and songwriting. Tax sings in a rather lower and more crooning style than he used on the Outsiders records, and the songs are contemplative, sentimental, and occasionally even vaudevillian. Actually, it's not bad at all, but the production often goes overboard into overdone fruitiness. The best numbers are the most serious ones, where the backing almost sounds like it's trying to emulate the full-bodied orchestral pop/rock swell of a Dusty Springfield session. "You Don't Have to Say You Love Me," which is an entirely different song than the Dusty Springfield song of the same title, and "You Didn't Call Me" are melodramatic standouts in that respect. Other tunes, like "Last Night" and "It's Not Important to You," aren't that different from his folk-rockish Outsiders outings, except for employing much gaudier pop orchestration. Unfortunately, some numbers are trifling happy-go-lucky pieces. Flatulent horns afflict both good and bad songs; "Let's Forget What I Said" is grating in its emulation of pre rock vaudeville; and the insertion of fluttering bird noises between the tracks might not be to everyone's taste. At its best, though, it's got an engaging melodic moodiness. It's worth seeking out by Tax/Outsiders fans, though it's quite rare.
Posted by: D&J на 03:14