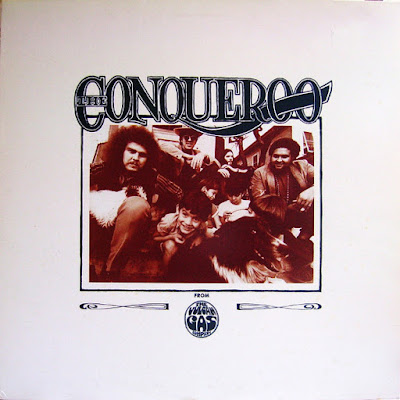 The Conqueroo were an American psychedelic-garage group, based in Austin, TX.
They were active from 1965-70.
Bob Brown - vocals, rhythm guitar
Ed Guinn - bass, keyboards, woodwinds, vocals
Gerry Storm - drums
Alvin Sykes - drums
Daryl Rutheford - drums
Charlie Pritchard - lead guitar
One of Austin's best-loved bands of this era they opened their own club, The Vulcan Gas Company in 1967 and among its attractions were the 13th Floor Elevators and many of the best black blues singers of the era. The club lasted until 1970. Their 45 appeared in a picture sleeve and featured some fine 'acid' guitar work. Indeed the band have been referred to as Austin's Grateful Dead. They moved to San Francisco for a while and whilst there Brown and Guinn also worked as The Angel Band. Disillusioned The Conqueroo split and returned to Texas. They reformed briefly in the mid-seventies.
https://www.discogs.com/artist/1414837-The-Conqueroo 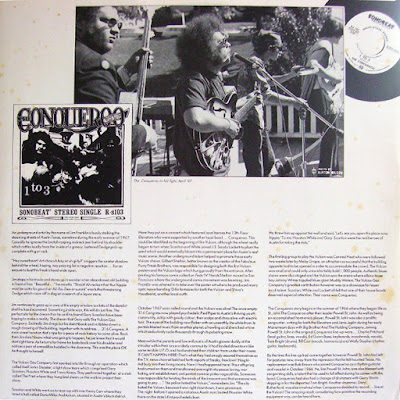 If any Austin group of the late '60s could be called the Vulcan Gas Company's de facto house band, it would have to be the Conqueroo. That, despite the fact that the Vulcan was self-billed as a psychedelic concert hall and the Conqueroo was hardly psychedelic although certainly a hippie favorite. If any musical genre could have been attached to the eclectic Conqueroo, it would have been not one but a fusion of many: folk, rock, jazz, and blues. Nonetheless, the Conqueroo was a regular at the Vulcan -- featured prominently on many Vulcan handbills and posters -- from the hall's opening in October 1967 until its closing in mid 1970. Sonobeat owners Bill Josey Sr. and Rim Kelley (Bill Jr.) first heard the Conqueroo perform with the 13th Floor Elevators at Austin's Doris Miller Auditorium in January 1967. But ultimately it was the Conqueroo's regular performances at the Vulcan that convinced the Joseys they had to record the group.
Recording sessions at the Vulcan Gas Company -- initially in December 1967 and again in March '68 -- yielded Sonobeat's fifth release and third rock single, a pairing of Conqueroo Ed Guinn's I've Got Time (featuring an enigmatically dramatic, yet strangely reserved, duet) and 1 to 3 (featuring an equally dramatic but uninhibited vocal by its composer, Bob Brown). No fancy recording techniques were used; the single is nothing short of two great songs performed passionately by great musicians, captured just a little raw at one of Sonobeat's favorite venues. It remains the only commercial single release by the original incarnation of the Conqueroo, who often shared the Vulcan stage with the Elevators, Johnny Winter, or Shiva's Headband.
Sonobeat issued the Conqueroo's single with a two-sided black and white picture sleeve designed by legendary Austin illustrator Gilbert Shelton (who lived with the Conqueroo and half a dozen other assorted characters in a large house just off the University of Texas campus).
A stunning image by celebrated Austin photographer Belmer Wright (not to be confused with another great Austin photographer, Burton Wilson) completed the sleeve, which has a bit of the look and feel of one of those famous Vulcan Gas Company handbills of the '60s. Both sides of the sleeve are identical, except for the song titles, hand lettered by Shelton. A banner flowing through the OOs in "Conqueroo" proclaims "Recorded Live at the Vulcan Gas Co.", but the single was not actually recorded before a live audience. Shelton's sleeve art refers to "The Conqueroo", but the group was later known as just "Conqueroo".
Originally scheduled as Rs-104 (which collectors will note is etched in the single's dead wax), the Conqueroo release moved up a notch on Sonobeat's schedule after Shiva's Headband had second thoughts about the release of their single, also recorded at the Vulcan and originally scheduled for release ahead of the Conqueroo's. Bill Josey Sr.'s handwritten notes on the Conqueroo master tape box indicate both songs were recorded using two 2-track Ampex recorders. The second recorder was used for vocal overdubs that were recorded immediately after the band laid down the instrumental tracks. There is an ethereal "other worldness" to these recordings, imparted by the band itself but enhanced by the vast acoustics of the Vulcan Gas Company.
While cataloging the Sonobeat master tapes in 2008, we discovered two instrumental tracks that the Conqueroo recorded during the March '68 session. Both are instrumental tracks that probably were supposed to have vocals but were never completed. One song may be titled None of Your Business, Waitress. Unfortunately, there's no additional information about these tracks in the Sonobeat archives, so we're uncertain why they were never completed and released.
~  sonobeatrecords 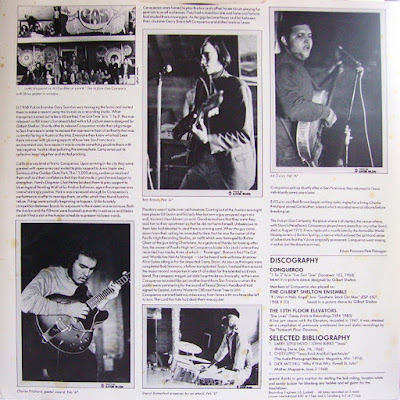 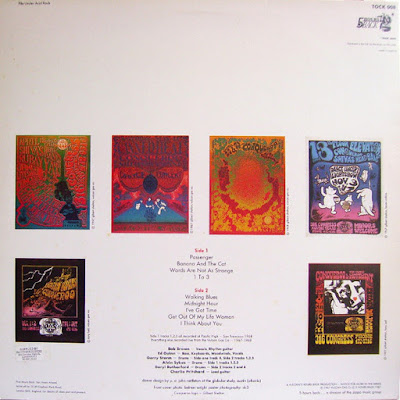