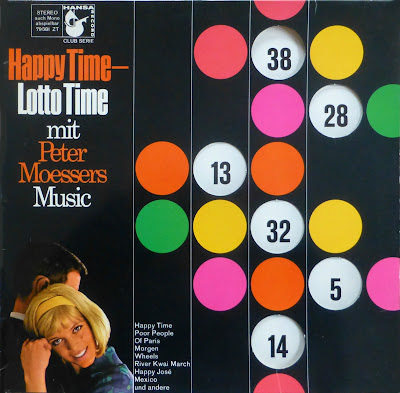 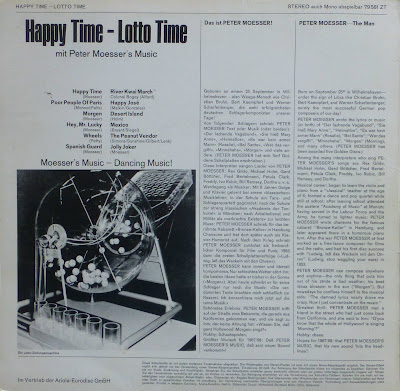 Peter Moesser (born September 25, 1915 in Wilhelmshaven, † September 3, 1989 in Lugano / Switzerland) was a successful German composer composer who wrote a number of million-seller.

At the age of six he learns violin and piano with a classical music teacher. After school he moves to the strictly classical Academy of Music in Munich. After military service, he first tried as a chanson writer at the Hamburg cabaret "Bronze Cellar", in which he later appeared as a piano humorist. After the war, Peter Moesser initially wrote as a freelance composer for film and radio.

He wrote the first hit music compositions, mainly as a lyricist for partner Lotar Olias, from 1953 for the film actor and chansonist Eddie Constantine (The Road to Your Heart). His first hit parade success was I would like to go out today for Margot Eskens (October 1955, # 3 Germany). In 1956 he first wrote the Eurovision contribution for Freddy Quinn, who specializes in sailor and long-distance songs. This is how it goes every night (March 1956). This was followed by Moesser's second hit parade note. Her name was Mary Anne (June 1956, # 6), and Ralf Bendix made it to # 2 at the same time. Then Moesser's first # 1 composition was released in 1957 with Heimatlos and already the third # 1 for Freddy (April 1957, # 1). Eskens and Quinn took over other songs from the pen of Moesser, such as Come back or Mum, You can not cry or Sulaleih (The Girl at the Well) for Eskens. Freddy Quinn once placed in the charts in Tampico (November 1957, # 5), The Legionnaire (July 1958, # 1) or I'll be back soon (October 1958, # 1). Fred Bertelmann made with Laughing Vagabond / Cantabamberra his first and only top position (November 1957, # 1) and made it Moessers first million seller, which even in the German version was sold 300,000 times in the US. The plate sales brought Peter Mösser according to the mirror, when settling 2.02 pfennigs per plate over 20 000 marks. For the back Moesser had written together with Franz Thon the completely unknown Cantabamberra for which there was not even a German music publisher; The authors each received more than 80,000 marks.

In 1958 he wrote for German rock'n'roll Peter Kraus O Baby make you beautiful (May 1958, # 5), the highest placing so far for Kraus. Then the Yugoslav singer Ivo Robic appeared, for whose first single Morgen / Ay, ay, ay Paloma was selected and immediately became a bestseller (September 1959, # 2). The song, arranged and produced by Bert Kaempfert, also reached the hit parades in the USA (# 13 pop charts) and Great Britain (# 23) and brought in a gold record. The producer Bert Kaempfert hastened to bring out an instrumental single with his orchestra (Morgen / Nur Du, You alone, 1959), which, however, was unsuccessful. The recently taken under record contract German beat group The Lords took over, based on the model of Nashville Teens, to the B-side of their first single Hey, Baby let the other the German version of the socially critical John D. Loudermilk composition Tobacco Road (1964), but missed the charts. Presented by the EMI as "the German Beatles", the first single also had to contain German texts, which the market did not honor. In the same year he wrote for the just founded music publisher Hansa Musik Produktion.

His instrumental piece "Happy Time" underpinned from 1966, the "drawing of lottery numbers". The instrumental hit quickly became a "catchy tune" and hit the B-side "Clipper 404" in Germany, Austria, Switzerland and Holland in the hit parades. On the label Laurie Records Happy Time / Clipper 404 came to the US and was played in many radio stations. It was followed by other successful instrumental music, such as "Mexico" and "Jolly Joker". In 1967 the label Hansa Records released the first LP "Happy Time - Lotto Time with Peter Moesser's Music".

In 1974, his second LP "Red River Story" enters the international hit parades of "Easy-Listening Music". In 1976, he met the young Munich-born Harald Faltermeier, who later started a great career as "Harold Faltermeyer" in the USA. Under the pseudonym Harold Falt he had published on the BASF label LP "World hits in Quadro" with little success in 1973. As the first "foster father" Faltermeyer gets to know Peter Moesser and the art of electronic music.

Under the well-known name "Peter Moesser's Music" Moesser and Faltermeyer create the title "High" (B-side And so) in 1977, which attracts great attention in Europe. This was followed by two LP's "Lifting" - The Beauty Case Orchestra and "Nick Babarossa's Strings" Stars, Stripes and Strings. In the same year both wrote for Roy Black the title "I want to you", the B-side of The love comes overnight. After that your ways parted.

It was only in the 1970s that Peter Moesser wrote some hits again, as for Katja Ebstein I want him (B-side of Wunder is always there, February 1970). With Giorgio Moroder, the later electronic pop specialist, he wrote in 1971 for Gaby Berger Who is crying is guilty of it. A largely unknown rarity remained the composition along with Harold Faltermeyer, released as "Peter Moesser's Music" under the titles High / And so on in 1977. That was not a German hit, but synth-pop / disco. In the same year both created for Roy Black I want to see you as a B-side of Love often comes overnight (September 1977).

PeterMoesserAt the end of the seventies, Peter Moesser retreats to private life. In the presence of his family, he dies on 3 September 1989 in Lugano Switzerland

Moesser is also the author of music and / or texts for several films. In 1957 he wrote for four girls from the Wachau and Die große Chance (Once in Tampico), 1958 for The Laughing Vagabond (pop song to the eponymous hit) and homeless, the melodrama reversed life was highlighted in 1961 with his compositions as well as the music film Songs sound on Lake Maggiore (1962).

GEMA has registered a total of 34 titles for Peter Moesser, to which there are several other registrations, of which 5 received a Golden Record. (Source: wikipedia)

And here's his LP with the Happy Sound for a Happy Time ... of course with the tunes for the TV show "Lotto Number Drawings" ... we have a little fun and maybe the music brings a lot of luck ...