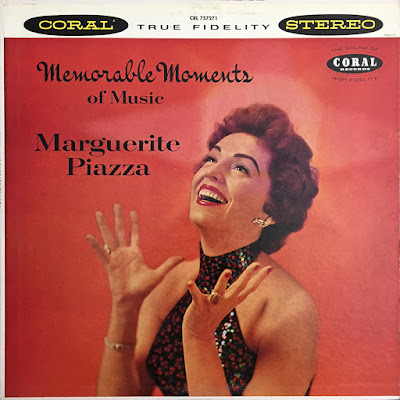 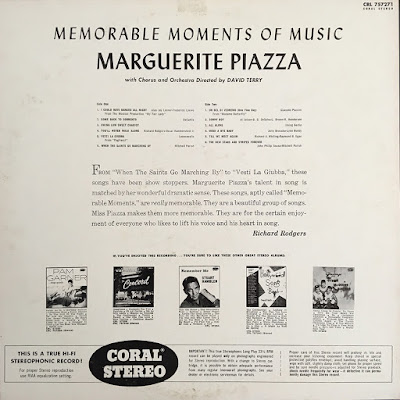 Marguerite Clair Lucille Luft was born in 1920 to Albert William Luft, Jr. (c. 1897–September 12, 1923) and Margherita (née Piazza; c. 1900–1958, later known as Margaret), who wed on January 24, 1917. Around 1927, the widowed Margaret Luft wed Reuben Davis Breland, whose surname Marguerite adopted. Marguerite was the first Queen of the Krewe of Virgilians during Mardi Gras in her native New Orleans. A 1940 graduate of Loyola University of the South's College of Music, she went on to study at Louisiana State University, where she was a student of the baritone Pasquale Amato. She adopted her mother's maiden name (Piazza) professionally.

In 1944, she joined the New York City Opera, and was the youngest member of the company. Her first role was Nedda in Pagliacci, and in subsequent seasons appeared in La bohème (as Musetta), Der Zigeunerbaron, Don Giovanni (as Donna Elvira, in Theodore Komisarjevsky's production), and Amelia al ballo (as Amelia). She made her first appearance with the New Orleans Opera Association in Martha (in 1945), followed by Hänsel und Gretel (as Gretel), as well as the title role in Il segreto di Susanna. In 1950, Piazza made her Broadway debut, in Happy as Larry, with Burgess Meredith directing and starring in the title rôle, and Alexander Calder designing.

As a result of that production, the soprano was invited to join the cast of the NBC television program Your Show of Shows, which starred Sid Caesar and Imogene Coca (1950–54). She made her debut at the Metropolitan Opera in 1951, as Rosalinde von Eisenstein in Die Fledermaus. Following the end of Your Show of Shows, she embarked on a career in supper and night clubs, bringing her further acclaim as an entertainer.

Personal life
During the 1950s, Piazza was a paid spokeswoman for Camel cigarettes. In the 1960s she endured three melanoma-related operations, and in the 1970s was treated successfully for uterine cancer. In 1971, the soprano was honored by then President Richard M. Nixon for her courage in fighting the disease.

She performed and was a noted philanthropist in her adopted hometown of Memphis, where she was a longtime supporter of St. Jude Children's Research Hospital. She sang the national anthem at no fewer than 27 Liberty Bowl football games.

Piazza was celebrated for her extensive efforts regarding various charities, especially the annual Marguerite Piazza Gala. On January 15, 1973, the Willis Music Company published Marguerite Piazza's Christmas Carol Sing-Along Party. Piazza's autobiography (co-authored with her daughter, Marguerite Bonnett), Pagliacci Has Nothing on Me!, was published in 2007 (ISBN 978-1-84728-394-8). Ms. Piazza was inducted into the Memphis Music Hall of Fame in 2016, becoming the first opera singer to be honored by the organization.