The Lovin Spoonful (Do You Believe in Magic) Debut Album 1965 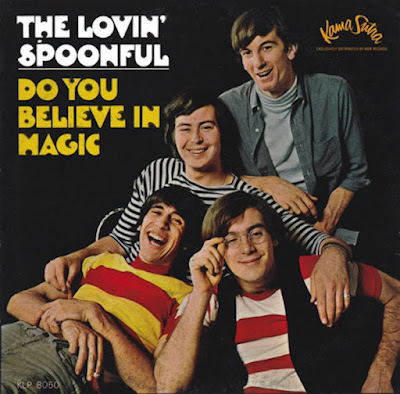 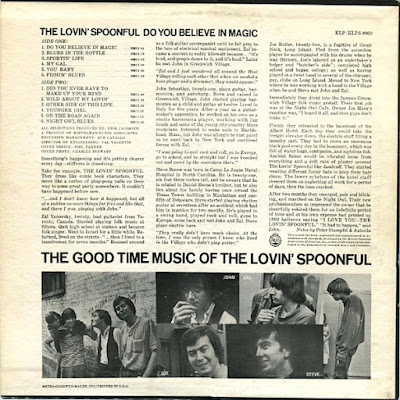 Do You Believe in Magic was re-released on CD in 2002 with five bonus tracks.

In his Allmusic review, music critic William Ruhlmann wrote "The album elaborated upon Sebastian's gentle, winning songwriting style... The album also revealed the group's jug band roots in its arrangements of traditional songs... The Spoonful would be remembered as a vehicle for Sebastian's songwriting, but Do You Believe in Magic was a well-rounded collection that demonstrated their effectiveness as a group."

"Do You Believe In Magic" is a song written by John Sebastian. It was first recorded and released by his group, The Lovin' Spoonful in 1965. The single peaked at number 9 on the Billboard Hot 100 chart. In 1978, Shaun Cassidy reached the top 40 with his cover version. The song has been recorded by various artists.

In 1965, the group The Lovin' Spoonful released the song as the first single from their debut studio album Do You Believe in Magic. The single was well received by the public and became a top ten hit on the Billboard Hot 100, peaking at number 9. According to the lyrics, the magic referenced in the title is the power of music to supply happiness and freedom to both those who make it and those who listen to it. Session drummer Gary Chester played tambourine on the track. The Lovin' Spoonful's version was ranked number 216 on Rolling Stone's list of The 500 Greatest Songs of All Time.

"Do You Believe in Magic" was featured in The Parent Trap, American Pie, Date Movie, Temple Grandin, and Rolie Polie Olie. The original version was also the theme song for the short-lived TV series State of Grace. The song is also significantly featured in the Jim Sheridan movie In America, as an Irish-immigrant family, having entered the U.S. on false pretenses, enter New York City for the first time

In 2012, the Lovin' Spoonful's version was used in the official "Meet the Pyro" trailer for the first-person shooter video game, Team Fortress 2.

"Do You Believe in Magic" became a top forty hit again in 1978 in both the U.S. and Canada when Shaun Cassidy released his cover as a single. Cassidy's version reached number 31 on the Billboard Hot 100. The song was Cassidy's second successful remake of a 1960s hit, the first being "Da Doo Ron Ron" from his previous LP.

"Do You Believe in Magic" was covered by American pop rock duo, Aly & AJ. Their version of the song was for Aly's film, Now You See It..., and it also appeared on their debut studio album, Into the Rush in addition to an appearance on the 2009 soundtrack to the TV show Wizards of Waverly Place. The duo consists of sisters, Alyson "Aly" and Amanda Joy "AJ" Michalka.
Other notable artists who have remade the song include John Mellencamp on his 1976 album Chestnut Street Incident, Bud Shank, and Randy VanWarmer.
A cover from the song was used in The Super Mario Bros. Super Show! episode "Mighty McMario and the Pot of Gold".
In the 1987 show Barbie and The Rockers episode "Out Of This World", Barbie and The Rockers sing a cover of the song as they prepare to do a concert in outer space.
Indie pop/rock band The Format released a cover on their compilation album B-Sides & Rarities,
In 1989, Kids Incorporated covered "Do You Believe in Magic" in the Season 6 episode "Stop The Presses".
In 1992, McDonald's used a rewritten version of the song for some of their commercials, replacing all of the lyrics (except for the first line) with ones pertaining to their talking Happy Meal items, specifically hamburgers, and Ronald McDonald.
In 2002, the song was later recorded by BBMak for the score of Return to Never Land, a sequel to Disney's 1953 classic Peter Pan.
In 2002, David Cassidy released the song on the USA version of his album Then and Now having also performed the song in a Christmas promotional television advertisement for Mervyn's department store
In 1989, Steve Tyrell performed a cover for the film Second Sight.
On September 4, 1993 when Jim Abbott of the New York Yankees pitched a no-hitter, the song was played after Twisted Sister song, "We're Not Gonna Take It".
In 2010 a few bars were used as background music to a television commercial for the Chase Bank iPhone app which allows remote check deposits using the iPhone camera.