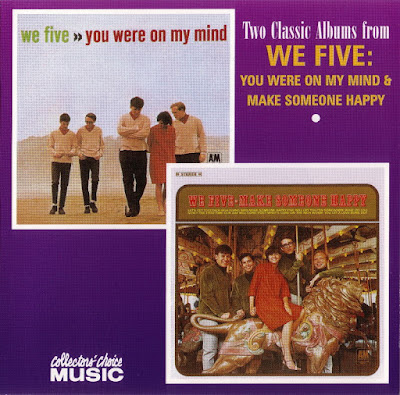 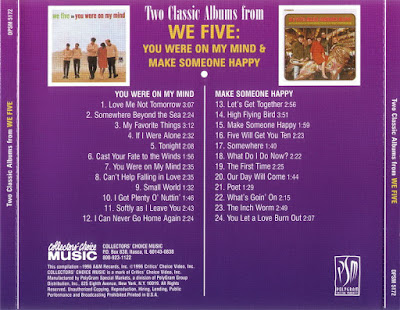 Although often overshadowed by the Los Angeles and New York folk-rock scenes, San Francisco also contributed several notable bands. Among them are We Five, featuring Mike Stewart (vocals/guitar/banjo) -- brother of Kingston Trio member John Stewart -- Peter Fullerton (vocals/bass), Beverly Bivens (vocals), Bob Jones (guitar/vocals), and Jerry Bergan (guitar/vocals). The quintet was among the first Bay Area groups to have chart success merging acoustic-based folk music with electric instrumentation. This single CD, from mail-order archivists Collector's Choice Music, contains the quintet's first two long-players: You Were on My Mind and Make Someone Happy. Both titles are similar in style and content, charting the linear progression of pop music and its fusion with folk, rock & roll, and post-bop jazz. We Five shared this trait with more than a few of their regional contemporaries, including the pre-psychedelic Jefferson Airplane. The two even shared material -- most notably covers of "High Flying Bird" and "Let's Get Together" -- the band's final Top 40 hit. The song's author, Chet Powers (aka Jesse Oris Farrow, aka Dino Valente) also had direct ties to the Northern California folk scene as a member of Quicksilver Messenger Service. The band's infectious pop renderings also include several show tunes as well. "Somewhere" (West Side Story) and "My Favorite Things" (The Sound of Music), as well as the up-tempo and freewheeling "I Got Plenty o' Nuttin'" (Porgy and Bess) are among the exceptional adaptations from the stage and screen. Equally impressive are Bivens harmony lead vocals on an achingly haunting "Inchworm" (Hans Christian Andersen). The velveteen melody dances within Bivens voice with childlike awe and wisdom. A more subtle influence heard throughout is rooted in pop-jazz -- such as the Jobim-influenced samba heard on the title track from Make Someone Happy. The percussive rhythms and opaque sonic terrain make a perfect contrast for the light and chirpy vocals that are most reminiscent of Signe Anderson's tenure with the folky Jefferson Airplane before the acid had kicked in. Another successful fusion of jazz and pop is the cover of Vince Guaraldi's "Cast Your Fate to the Wind." The easygoing melody is perfectly suited to We Five's nimble delivery style and stands as one of the least-dated-sounding pieces on this two-fer. In light of the strength in the lesser-known material, the band's one big hit, "You Were on My Mind," quite frankly pales by contrast. However, it stands as a prime example of the genre-bending sound of We Five. This incipient version of the combo actually disbanded almost a year before the release of Make Someone Happy in early 1968. However, legalities kept the name alive well into the 21st century, despite only Jerry Burgan remaining from the incarnation of We Five heard on these recordings.