The Dubliners ‎– Spirit Of The Irish - The Ultimate Collection 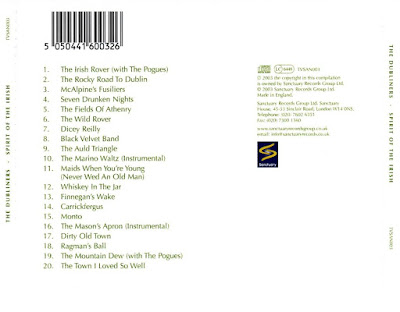 The Sanctuary label's 20-track collection spanning the Dubliners' near 40-year career is an excellent overview of what the band became known for: a fiery traditional Irish band rooted firmly in the pub. The Dubliners never left behind that raw sound associated with the pub, nor did they ever attempt to dispel the image of a rowdy bunch of hell-raisers often associated with the band. Instead, they embraced this sound and image so many of their followers spit-shined and even upped the ante a quarter century into their recording career when they teamed up with the notorious fiery Irish revivalists the Pogues to record a handful of songs. In fact, Spirit of the Irish is symbolic of how much the Dubliners reveled in their prized students, the Pogues, that the collection is essentially bookended with the two bands performing together. Most of the songs collected here are traditional tunes arranged by the band, which has been a trademark of the Dubliners' long and successful career. While most of the songs are centered around upbeat drinking and dancing songs like "Seven Drunken Nights" and "Whiskey in the Jar," there is also a fair representation of ballads in "McAlpine's Fusiliers" and "The Fields of Athenry" to prove the diversity and musicianship the Dubliners have shared for the better part of four decades. For those looking to immerse themselves in the traditions of Irish music and one of Ireland's most beloved and steadfast ensembles, Spirit of the Irish is the perfect starting point.