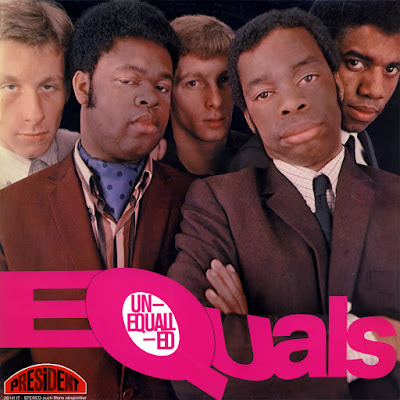 An energetic East London combo, the Equals balanced maximum R&B with plenty of pop, plus a few nods to vocalist Eddy Grant's West Indian background. Grant, born in British Guyana, moved to England with his family at the age of 12, and settled in a council estate named Hornsey Rise in northeast London. Four years later, he formed the Equals with schoolmates Lincoln Gordon (guitar), his twin brother Dervin Gordon (originally the vocalist), Pat Lloyd (guitar, then bass), and drummer John Hall. The band began gigging around London, amazing audiences with their apparently limitless energy and a distinct style fusing pop, blues, and R&B plus elements of ska and bluebeat.

By 1965, the Equals began doing dates in Europe as well, and released their first single on President Records. Though "Hold Me Closer" didn't perform on the charts, DJs began playing the flip side and by 1967 "Baby, Come Back" had hit the top of the charts in Germany and the Netherlands. One year later, the single hit number one in Britain as well, and brushed the charts in America. Subsequent singles lacked the immediate punch of "Baby, Come Back," however, and the Equals landed only two more Top Ten hits: "Viva Bobby Joe" and "Black Skin Blue Eyed Boys," the latter an apt message track from one of the few racially mixed bands of the era.

Grant left the Equals for a solo career in 1971, and though the band never charted again, they remained a popular live act, especially on the continent. Drummer Ronald Telemacque and guitarists Dave Martin and Frankie Hepburn were later added to the lineup.

Unequalled Equals (sometimes interpreted as just Unequalled), released in 1967, was the debut album by The Equals. Each national edition had different cover art and minor variations in the track order, the most notable being the omission of "Baby, Come Back" from the US edition, in favor of "I Get So Excited". 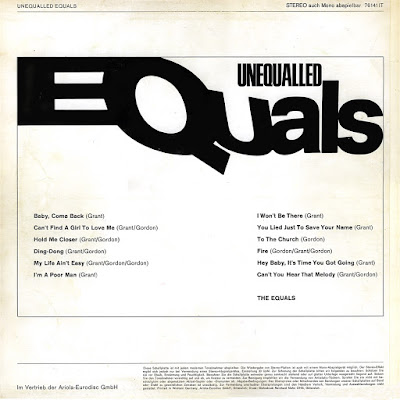