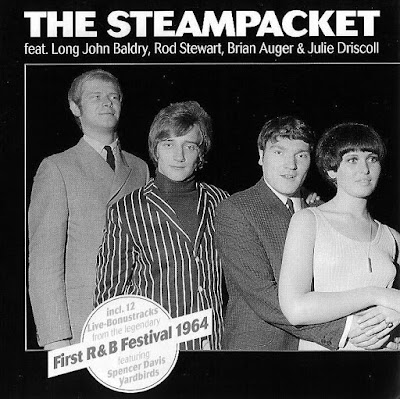 Because their ranks included a future superstar, the Steampacket have received more attention than they really deserve. Featuring vocalists Rod Stewart, Long John Baldry, and Julie Driscoll, as well as organist Brian Auger, misleading reissues of the group's demos bill the act as "the first supergroup." That's simply not the case. They were an interesting conglomeration, and innovative in the respect of featuring several singers. But their true status is as a short-lived footnote, and not one that rates as a highlight of any of the principals' careers. 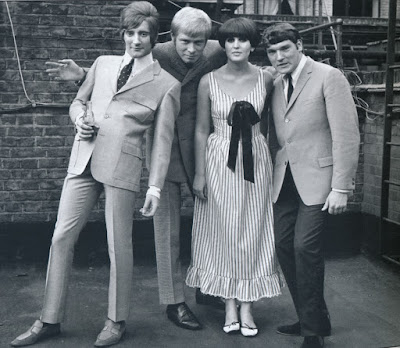 Though the Steampacket played gigs at small venues around London as early as 1962, the nucleus of the band formed in mid-1965, after the demise of Baldry's backing outfit, the Hoochie Coochie Men. Baldry envisioned a soul-type revue, each singer taking the material for which he or she was most suited. Management by Giorgio Gomelsky (who also handled the Yardbirds and several other interesting British groups) and a supporting slot on the Rolling Stones' summer 1965 British tour seemed to promise a bright future.

Their professional activities were complicated by the fact that Baldry and Stewart retained separate managers for their individual careers. Additionally, Baldry was already signed to United Artists as a solo act, thwarting Gomelsky's plans to record the band. This led to disputes between the different managers, and the Steampacket broke up before they managed to enter the studio.

Officially enter the studio, that is. Gomelsky did record some tapes with the band at a rehearsal at the famous Marquee club in London. These have been reissued numerous times since the 1970s, and show the band to be a competent but hardly thrilling soul-rock outfit, anchored instrumentally by Auger's jazz blues organ. Stewart moved on to the Jeff Beck Group, the Faces, and solo stardom; Baldry moved into middle-of-the-road pop, landing some British hit singles in the late '60s. Auger had recorded as a backup musician on Baldry's mid-'60s solo records, and his Brian Auger Trinity group continued working with Julie Driscoll, reaching the U.K. Top Five in 1968 with "This Wheel's on Fire."
https://en.wikipedia.org/wiki/Steampacket 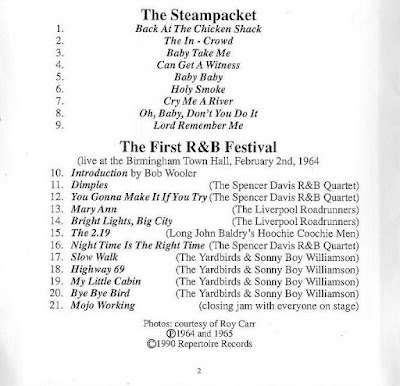 The Roadrunners' earliest recorded output, You Can Make It If You Try and Mary Ann, comes from the First Annual R&B Festival at Birmingham Town Hall on February 28th, 1964. Organized by Georgio Gomelsky, this one-night festival featured Sonny Boy Williamson backed by the Yardbirds and supported by Long John Baldry and the Hoochie Coochie Blues Band, the Spencer Davis Rhythm & Blues Quartet, and, of course, the Roadrunners. The gig was recorded by Gomelsky, and this somewhat low-fidelity album has subsequently been released by Charly Records and on CD by Repertoire (Steampacket/First R&B Festival). Incidentally, Rod Stewart (then roadie for the Hoochie Coochie Men) also makes an early appearance on the album and the Roadrunners also appear as part of the "All Star" jam through "Got My Mojo Working" which closes the album. Around this time, the band were offered a deal by a major record label. However, Mike Hart seemed reluctant to get involved with "all this commercialism," and it fell through. The band returned to Liverpool and added the two sax players Nick Carver and Johnny Phillips, becoming a James Brown-style soul outfit. Following the second Star Club album, the band returned from Hamburg and appeared on one more disc, the Pantomania EP, which was made to raise money for the University rag week in 1965. It includes their version of the Bobby Bland classic "Cry, Cry, Cry" and a version of "The Leaving of Liverpool." Mike Hart left shortly afterwards to pursue a solo career, and the Roadrunners carried on for a while under the leadership of Pete Mackey