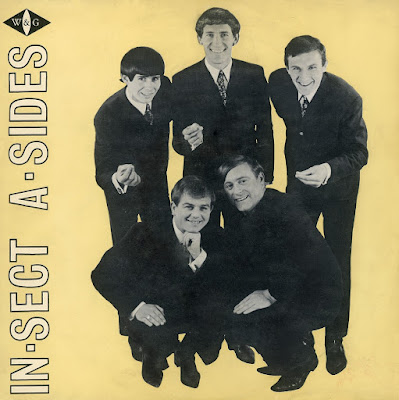 – In-Sect – Started out in the early 60’s and became the In-Sect (great name) in 1966. One of the few bands of this era to release an album “Insect A Sides”. The album, and apparently their stage show, was a mix of middle of the road, top 40 covers, showband or wild R&B/freakbeat such as their first two singles mentioned below. After this they ended up doing novelty singles and appearing in cabaret nights. I Can See My Love is definitely worth tracking down.
– The In-Sect rock band was formed in Adelaide in 1965 and was an instant hit in the Australian market as a showband. Their performances were legendary and were such that they could successfully perform to ‘teeny-bopper’ crowd, nightclub or cabaret circuit. This was regarded as quite unique at the time.
– The In-Sect was an early Adelaide pioneer of the local recording industry enjoying a number of chart successes on the W&G Label. ‘Let This Be a Lesson’ was the biggest hit written by local songwriter Simon Paul and given heavy airplay by top 5AD DJ Bob Francis and then the others followed suit making it as a chartbuster. The In-Sect also fostered at the time then unknown DJ John Vincent’s recording career by also arranging a contract with W&G. The rest is history with ‘Ow Ya Goin’ racing away as a cult smash hit too.
– Frankie and the In-Sect today is a six piece band with special four-part vocal harmony of talented, enthusiastic performers that have a special skill to really get a crowd going initiated by band founder and entertainer Frank Sebastyan. In support are Vocalist Sonja Dixon, Rodney Scott Bass and Vocals,
Robert Parker Keyboards and Vocals, Guitarist Jim Jonas and Joff Bateman – Drums.
– Frankie and the In-Sect is a band that creates an exciting diverse music experience for its audiences. The broad base from authentic rock’n’roll to current funk energy is great to listen and dance to. Frankie and the In-Sect is one of Adelaide’s most entertaining bands for your pleasure.
– Their best songs were Let This Be A Lesson, I Can See My Love and their cover of The Yardbirds’ Over Under Sideways Down. 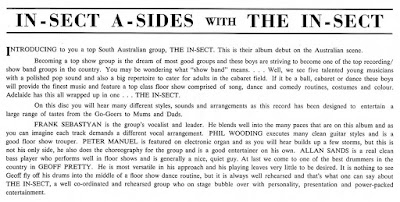 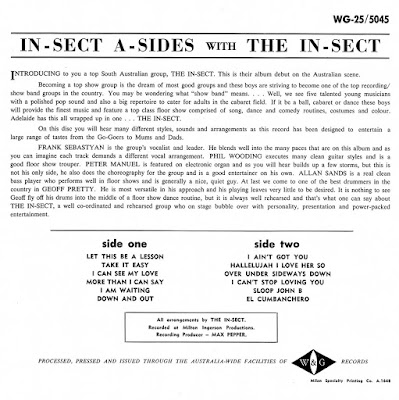