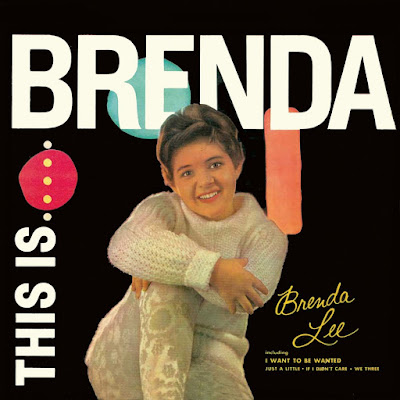 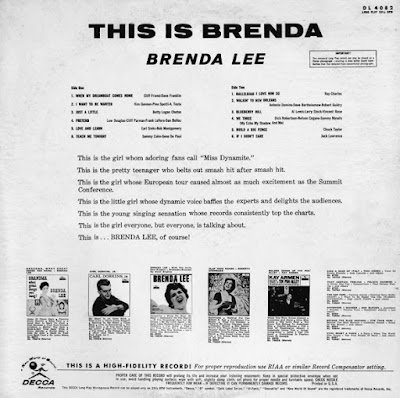 "This Is Brenda" is the third studio album by American pop and country artist Brenda Lee. The album was released on October 10, 1960 on Decca Records and was produced by Owen Bradley. The release was Brenda Lee's second studio album released during 1960 and contained the single "I Want to Be Wanted", which became a number one single on the Billboard Hot 100.
"This Is Brenda" was recorded between March 1960 and September 1960 in six separate sessions that took place at the Bradley Film and Recording Studio in Nashville, Tennessee, United States. The album contained twelve tracks, a series of which were cover versions of previously recorded country and pop songs. The opening track "When My Dreamboat Comes Home" was a song originally recorded in 1956, followed by the track "Teach Me Tonight", which was recorded by The DeCastro Sisters in 1954. There is also a cover version of Ray Charles's "Hallelujah, I Love Him So" and "If I Didn't Care", originally by The Ink Spots in 1939. Richie Unterberger of Allmusic called the track "I Want to Be Wanted" to sound neither "country" nor "pop". He also said that the "rock and roll side" of her was represented by a series of cover versions of previously recorded rock and roll songs. Unterberger gave the release four out of five stars, stating, "Brenda Lee's third album was significantly above the average for a pop/rock LP of the era. The orchestrated Nashville production was lush but tasteful, Lee's singing unfailingly committed, and the material pretty strong, even if there was nothing else on the album as strong as its big hit, 'I Want to Be Wanted.'"