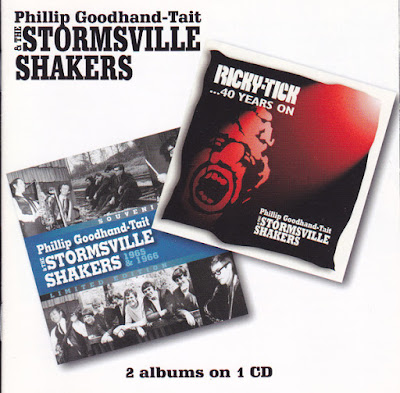 The Stormsville Shakers were among the most promising R&B-based rock & roll bands of the British beat boom who did not find success. They had a great reputation -- and one fully deserved -- at places like the Ricky-Tick Club, but somehow never managed to get the right song out at the right time for a breakthrough as a recording act. Their roots went back to the third wave of British rock & roll's early history, around 1960 -- a young Philip Goodhand-Tait, a pianist of some renown among the students at his school in Guildford, Surrey, joined with a pair of friends in forming a band, which evolved along with its lineup through 1961, when, after a stint as Phil Tone & the Vibrants, they became Phil & the Stormsville Shakers (all the members were admirers of Johnny & the Hurricanes, who had lately released an album called Stormsville).

The core of the original lineup was Goodhand-Tait on vocals and piano, Kirk Riddle on the bass, Ivor Shackleton on guitar, and Paul Demurs on drums, and they eventually added a pair of saxophonists. Their original sound was pure rock & roll, but they soon found room in their act for some serious American-style rhythm & blues. There were plenty of other Surrey-based bands pushing into this field with a vengeance, most notably the Yardbirds, in whose wake groups like the Stormsville Shakers seemed to be following. This transition into R&B was only pushed further and harder when they were chosen as the backing group for visiting American R&B singer Larry Williams on a tour of England, who was accompanied by Johnny "Guitar" Watson; soon they were playing songs by James Brown and other iconic American soul stars, and getting good enough at it that the material stayed in their repertory after the tour (which also resulted in their backing Williams on two LPs, Larry Williams and On Tour). By the time the smoke cleared, the Stormsville Shakers were a sextet with a pair of reedmen in their ranks -- but somehow, despite an ever-widening audience for their live performances, they could never get it together as a recording act. They played clubs such as the Flamingo and the Marquee in London, and crossed paths on the same bills with such American legends as Sonny Boy Williamson II, Rufus Thomas, Jimmy Reed, Howlin' Wolf, and Screamin' Jay Hawkins; and they worked the same rooms as the Paramounts (another immensely talented hard-luck outfit, fated for obscurity until they became Procol Harum), Similarly, British artists like the Paramounts (later to become Procol Harum), David Jones & the Lower Third (later better known as David Bowie), Zoot Money, and Cliff Bennett, One new song, "Long Live Love" written by Chris Andrews (a friend of the band), that they were killing audiences with on-stage, ended up in the hands of Sandie Shaw, who scored a number one with it on Pye Records in 1965; meanwhile, the Shakers didn't get a record out under their own name until the following year, and then it was an EP issued only in France (albeit on EMI). It died a death, as did the band's immediate prospects for fame beyond the confines of the clubs they were playing, and by the time their next opportunity came along, the landscape under them had begun to shift -- R&B and soul, at least as done by white English acts, had become passe, and psychedelia was starting to dominate the music scene. Worse yet, horn bands seemed to be out, and the Shakers had a pair of saxmen in their ranks. By 1967, the members decided that a change of image and sound was in order and the Stormsville Shakers morphed into Circus, a psychedelic outfit that lasted for a pair of singles and an album on Transatlantic. Unlike the Paramounts, whose reconfiguration as Procol Harum proved their salvation, Circus was a disastrous detour for the Shakers.

In 1966, following the release of the French EP (which contained four of his original songs), Philip Goodhand-Tait had been signed up as a composer by Dick James Music, the publishing company that, at the time, represented John Lennon and Paul McCartney, amongst others. And by 1967, he'd begun to see some significant songwriting money start to come his way, while the rest of the band were living hand-to-mouth, still waiting for their big break. This sudden boost to his career did nothing to stabilize the band, and the Stormsville Shakers called it a day in 1968. Goodhand-Tait went on to a long career as a songwriter, producer, and session musician, in field far away from R&B. Some 35 years later, however, he and the other surviving members of the band reunited for a series of shows that were successful enough to result in a new round of recording. The first result was the album Ricky-Tick . . . 40 Years On and, five years after that, a CD combining that record with 14 of their classic '60s sides, rescued from various studio demos and live recordings. 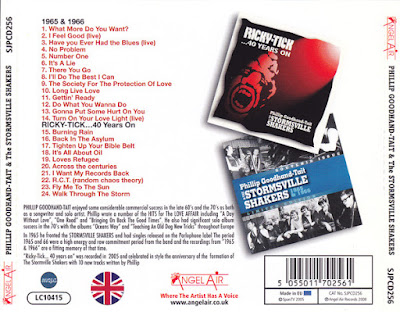