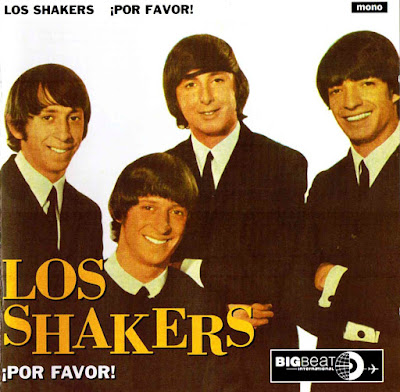 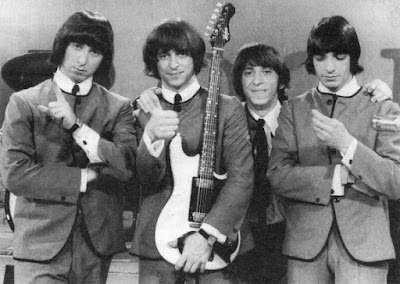 Los Shakers formed in 1963 in Montevideo Uruguay,at first they played at the Hot Club , (jazz and
avant garde place) to join the james, in early '64  after they listened Beatles they decided to
change their music, instrument  to be beat combo. Soon after they moved to Argentina.

In 1964, Argentina's musical environment was completely dominated by the "New Wave"- pop singers singing catchy songs, making a big impact but disappearing as quickly as they came. They were the product of record producers of that era, with some honorable exceptions. In this region "Beatlemania" didn't find a worthy representative.
The first band that tried to fill this emptiness was "Los Buhos" (The Owls), but their lack of composing and instrumental skills led them to remain on the fringes.
Nevertheless, on the other side of De la Plata river in Uruguay, two brothers and two friends, all talented musicians that found an escape in the Jazz sessions at the Hot Club of Montevideo, had found in the Beatles what they where looking for, an expression of genuine music that represented them.
They were, Hugo and Osvaldo Fattoruso, Pelin (Roberto Capobianco) and Caio (Calos Villa). They were very young, the youngest was just 16 years old. When they saw "A Hard Day's Night" they decided to form a band which they called "The Shakers".
They started to play in the bars of Montevideo's and Punta del Este, with  huge success, they also recorded a few songs in very primitive conditions.
Then they got a contract with Odeon from Buenos Aires. Odeon  brought them to Buenos Aires where they recorded some records that failed to make much of an impact. Then they had incredible success with a single featuring two of their own compositions, "Break it all" and "More". This made the difference.
The sound was Beatles-like, but not an ordinary or rough copy, instead a copy of superior quality, superior than many of the foreign singers of that era. Added to this, was the quality of their own compositions, their own songs were of a surprisingly
high quality. At the same time they recorded an album with their own songs, "The Shakers", which included their latest hits, plus they began making live presentations and television appearances in Argentina and overseas. They recorded an album which was released in the USA (Break it all) and another one in Argentina (Shakers for you), comprised almost completely of their own songs, plus they released several singles with their songs and covers from The Beatles.
Slowly they started to get worn out, mainly from the number of live presentations that they did and also for another important reason, the lyrics. Although the quality of their music was high, the English lyrics were of a doubtful quality, sometimes even bad, and with the evolution of rock in Argentina, they started to be left out by the bands that decided to gamble and sing in Spanish.
That was the way Argentine national rock went, and The Shakers were left out, partly by their own decision.
The Shaker's last album (with their original members) was a masterpiece, they called it La conferencia secreta del Toto's Bar (The  Totos' Bar Secret Conference), this was inspired in its lengthy name by "The Sergeant Pepper's Lonely Hears Club Band".
Afterwards,  an album by the name "The Shakers" came out , but without Hugo and Osvaldo Fattoruso, who were involved in other projects in popular music in Rio de la Plata and in radio 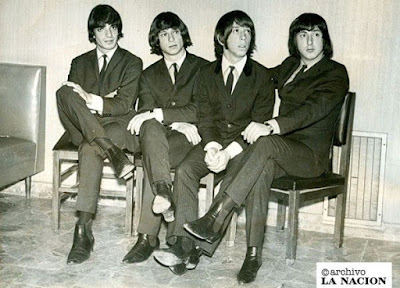 Los Shakers were fairly successful in mimicking the jangle of the early Beatles sound, writing most of their material with a decent grasp of the British Invasion essentials of catchy tunes and enthusiastic harmonies. While the grammar is fairly broken and pidgin, soundwise the Shakers were actually superior to many of the bona fide Mersey groups; if you like the Beatles sound as heard on tracks like "I Should Have Known Better" or "I'll Be Back," you'll like this stuff. Popular in their native land, the Shakers were understandably unable to compete on an international scale, although their 1966 album, Break It All, was actually issued in the States. Today they enjoy respect from hardcore '60s collectors, and much of their material is available on reissues. 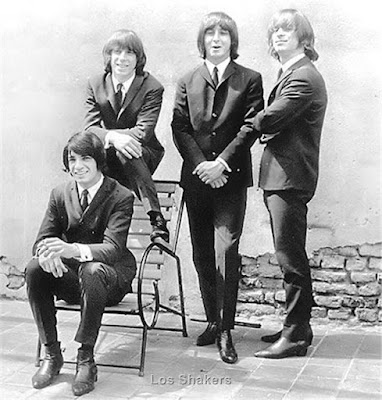 Despite reasonable availability of some of their material to international audiences on reissues, the details of the Shakers' career remained pretty mysterious until Alec Palao's detailed liner notes to their 2000 CD reissue Por Favor. The group was formed by brothers Hugo Fattoruso (lead guitar, keyboards) and Osvaldo Fattoruso (rhythm guitar), who as a team wrote most of their material. Like so many combos around the world, the specific motivation to form the group came from watching the Beatles' movie A Hard Day's Night. The band remained extremely influenced by the Beatles throughout their career and were in fact not too aware of or interested in the work of other British Invasion groups. Signed to a deal by EMI/Odeon in Argentina, they issued their first single, "Break It All," in 1965. The band became very big in both Uruguay and Argentina, and also toured in several other South American countries.

There was never a concerted effort on the band's part to invade the English-speaking market, and they never played in North America. However, a small New York label, Audio Fidelity, took the unusual step of issuing a Shakers album, Break It All, in the States in early 1966. This LP actually consists mostly of re-recordings (and good ones) of songs from their debut Uruguayan long-player, as well as songs that had appeared on singles. For this album Osvaldo Fattoruso ended up singing a bunch of tunes that his brother Hugo had sung, perhaps because Hugo's voice was in hoarse shape. So although this is the album that fans outside of South America are most likely to be familiar with, it actually doesn't contain the original versions from the Shakers' early repertoire, although most of those songs from the original (South American) Shakers debut LP are now included on Ace's Por Favor reissue. 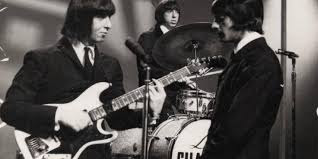 The Shakers continued to follow the Beatles' lead through 1968, introducing Revolver-like guitars and backwards effects, and then some Magical Mystery Tour-type psychedelia, as well as some occasional influence of their native South American rhythms and musical styles. While it's usually obvious where the inspiration is coming from, the level of writing, playing, and harmonies remained quite respectable through their third and final album, 1968's La Conferencia Secreta del Toto's Bar. The Shakers broke up toward the end of the 1960s, with the Fatturoso brothers recording an album for Odeon in 1969 before moving to the United States for a few years to work with Airto Moreira, and then forming the Latin rock group Opa. Drummer Caio Vila and bassist Pelin Capobianco, with a couple of Capobianco's brothers, recorded a 1971 album, and in 1981 the Fatturoso brothers did a reunion album with the Otroshakers. 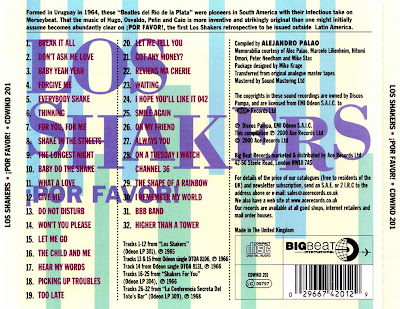