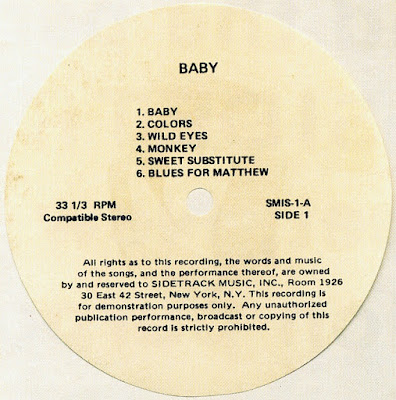 Limited reissue of scarce privately pressed album from 1969. Little is known of the band, and the album appeared as a test pressing (100 copies) with no jacket. Includes 'Wild eyes' which has appeared on a couple of compilations of rare American psychedelia/rock.

"The New York band Sidetrack recorded a demo album in the late '60s that never found release until finally getting issued in 2006 on CD. Many such relics from the time did not find release, at least in part, because of substandard production and sound quality. This is not the case with this would-be LP, which is quite professionally recorded and performed. One imagines that little or no extra work would have been required to ready it for commercial availability, and it’s been reported that Elektra was indeed interested in adding the band to its roster, though nothing by Sidetrack appeared on the label. That doesn’t necessarily mean, however, that Elektra should have released it, or that the album’s failure to surface was such a great loss. The material’s in a middling if largely non-indulgent psychedelic vein, chiefly distinguished from many other such average outfits by varied keyboards (piano, organ, and electric harpsichord) with a touch of classical influence. Perhaps there’s a bit of Left Banke to some of the arrangements, though with heavier instrumentation, far less pop hooks, and rather wan or absent vocal harmonies (the greatest deficiency in terms of the production). Untypical of the record, which largely sticks to tracks between two and four minutes in length, is an 11-minute psychedelic instrumental that almost sounds like a baroque derivation of the kind of mood the Paul Butterfield Blues Band created on their classic “East West.” Not quite as untypical, though one of the better tracks, is the short acoustic ballad “Blues for Matthew,” which closes the record" 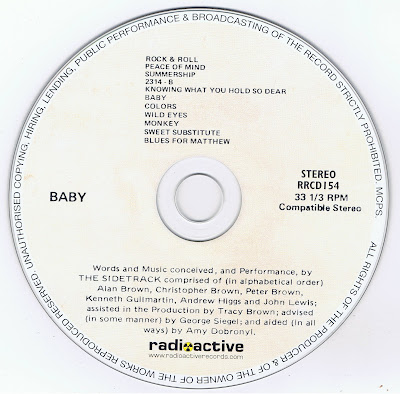 "Sidetrack's only known recorded effort is this 1969 demo album which originally appeared in a blank sleeve with the album's labels glued to the cover! The story is that this is a demo pressing for an intended Elektra release that never happened, although after listening to the album, it is tempting to conclude that had the label gone ahead, Baby, with its classy, late '60s baroque pop/folk style, could have been an album of some significance. Sidetrack managed to combine oddball but accessible pop with far out experimentation and a distinctive keyboard sound (most songs have no guitars at all) courtesy of various permutations of piano, organ, harpsichord and harmonium. The songwriting, often melodic and addictive, is always of the highest order, thus neatly avoiding the 'ballad-type' band musical cul de sac into which guitarless bands so often blundered. The production is crisp, clear and supremely professional, the musicianship, including the up-front bass playing, is never less than exemplary and the songs, always veering towards the eclectic rather than the predictable, are a continuous source of interest. This album is something pretty special: a recording that makes one regret Elektra's lack of foresight in not making it commercially available as well as the opportunity to develop Sidetrack's considerable potential which slipped through the label's fingers."

"The album has is own special atmosphere, which is end of 60's styled, song driven with some colourful melodic clarity in expression-. It is well arranged, often with multilayered keyboards (piano's, harpsichord, organ), bass and drums but almost no guitars.

The songs fit well together as if there's a story line between them. The baroque elements are also very special which are worked out now and then, at first only a little bit on Baby, and well adapted into the composition on Sweet Substitute. Blues for Matthew has true Bach-like arrangements, a complex almost symphonic track with string-,band- and vocal arrangements. A blues element of harmonica is mixed greatly into this rather unique track. The first tracks on the second side are rather short. A separate song easily remembered into as a pop standard and to take out of the context of the album, might be Summershi. 2314-B is the second long track, with a jazzy/bluesy, half composed, half improvised evolution of organ, harpsichord, bass, harmonica, and some complex rhythms. Also this track has a rather baroque symphonic theme further on, which is equally successfull and in a catchy way mixed with the other styles. After such an impressive complex track, Knowing what you hold so dear is held much simpler, a short song accompanied by some acoustic guitar arrangement only."

Tracks are written in the wrong order on the CD.
Correct order is written on this text:

This release has been blocked from sale in the marketplace.
It is not permitted to sell this item on Discogs.