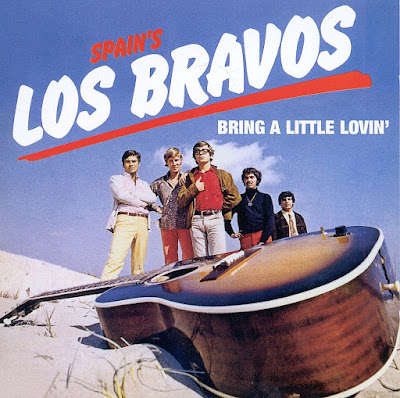 "It was the summer of 1966, the British Invasion was dying down, and American teenagers were getting together in their garages and fighting back." So begin the liner notes for the 2000 reissue of Spain's Los Bravos' Bring a Little Lovin', produced by Ed Strait and the crew at Retroactive Records. The notes continue to tell how German-born lead singer Mike Kogel (ex-Mike & the Runaways) met members of a Spanish group Los Sonor. After changing their name to Los Bravos and signing a management deal with Alain Milhaud, they were eventually signed to Decca Records' Spanish division and assigned to work with successful British producer/arranger/conductor/composer Ivor Raymonde. Raymonde (who, by then, had scored U.K. hits with Marty Wilde, Billy Fury, Dave Berry, and others) produced the band's "Black Is Black" single that same year. It shot up the charts, to number two in the U.K., and soon the band enjoyed moderate to major success around the world. By April 1968, however, there would be the inevitable changes in the group's chemistry that would mark the decline of their popularity, this despite all efforts by Decca-London to keep them from being a one-hit wonder. To wit, Raymonde was no longer producing the band (their manager, Milhaud, took on that role), and they were turning to other songwriters for help as well. Harry Vanda and George Young of the Easybeats, for instance, would provide them with "Bring a Little Lovin'," but the single only managed to chart at number 51 in America. When their July 1968 Bring a Little Lovin' album was issued, it actually featured five songs from their second U.K. release, and five from their third (which had remained unreleased in England). London's Parrot Records subsidiary label -- home to a legendary roster of groundbreaking pop acts, including Tom Jones, the Troggs, and the Walker Brothers -- failed to follow up with a second single for nearly a year. When "Save Me, Save Me" was released in February '69, Los Bravos were never quite able to reach the same heights as "Black Is Black," although it's quite evident from their first-ever U.S. reissues that the group also made really good pop albums. Retroactive's CDs feature the original LP artwork, rare photos, lengthy liner notes, and a full group discography. Bring a Little Lovin' also features "Los Chicos con las Chicas," which wasn't on the original album (it replaces "Black Is Black" from the first album, which had also been added to this album to pump sales). Also featured is the Spanish-language version of "Then the Sun Goes Down." 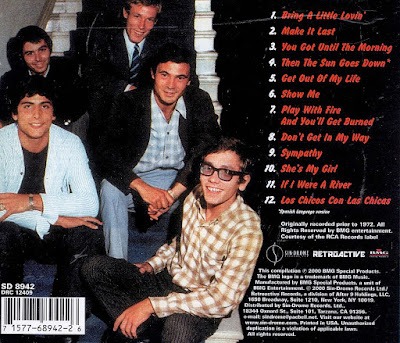