If you gasp at the name of this group - wait until you hear the sound that
these boys produce! The fun of the pun may turn out to be that there is no
double meaning at all. THE SINGING END sings- and brings to an end all
other singing efforts by other groups.
The group is still young. But its members are not exactly greenhorns. Each
of them had run up a reputable records as a soloist in successful bands before
they deciced to join forces in 1970, emerging with a group of their own which
at that time was called „THE END", because is signalled the end of a period
of playing somebody else's tune. Form now on it was to be their own music.
Tre group was no sooner founded than it was given a contract by the young
and enterprising label of RESONO. But more than one year was allowed to
pass before the first LP-production was considered worthy to present the new
sound and the new name om THE SINGING END to the public.
To the international public, of course.

A word of warning, however, will not he amiss. Turn away, all of you who
expect to hear another „Underground" group or that „beat-band Nr. 2775".
„THE SINGING END" is unique. They are a hunch of individualists. List-
ening of their music, some of you will find hereditary evidence of great an-
cestors. Of course, „no man liveth unto himself", but, recognizing an admitted
homage to Vanilla Fudge, Crosby, Stills, Nash & Young, or being reminded
occasianlly of the sound of the „Four Freshmen", should rather contribute
to the educated lister's acknowledgement that he is being presented with
the newest addition to Pop Olympus.

And here are the members of the group:
RAINER PIETSCH - The leader. Plays piano, organ, bass- and
accusticguitar- and sings. He composed all
titles of this LP.
ALF GARDNER - vocal and percussion. Also a solo vocalist.
HERBERT IHLE - vocal, harmonica and rhythm-guitar.
GЬNTHER LЬCKERATH - vocal and lead-guitar.
ROLF LAMMERS - keyboards.
DIETER GEIS - drums.
and Peter Lahn & his orchestra 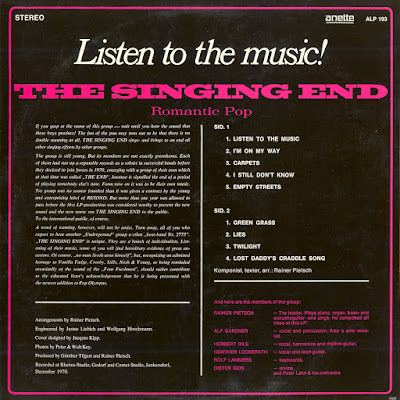