Tim Andrews - Something About Suburbia - The Sixties Sounds Of Tim Andrews 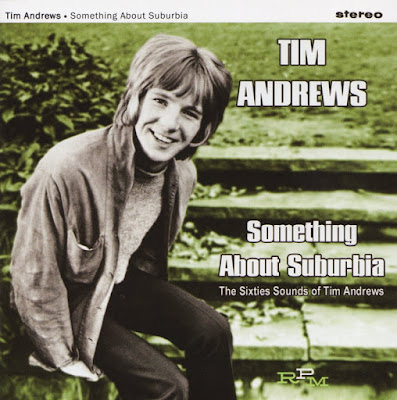 British '60s pop singer Tim Andrews was a versatile singer/guitarist who sang for several bands before embarking on a short-lived solo career. Born Chris Andrews, he appeared as the Artful Dodger in the London and New York productions of Lionel Bart's Oliver before settling in London in 1965. Andrews then sang with the mod ensemble the Gremlins before joining the Fleur De Lys in 1966 as a replacement for original singer Frank Smith. After parting ways with the Fleur De Lys in 1967, Andrews changed his name to Tim so as not to be confused with another singer/songwriter at the time. As a solo artist for Parlophone, Andrews teamed with songwriter Paul Korda and released several singles from 1969 to 1970 including "Angel Face," "How Many More Hearts Can Be Broken," and others. 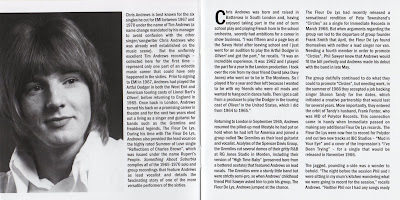 Something About Suburbia: The Sixties Sounds of Tim Andrews 2013

Something About Suburbia collects all of the recordings British vocalist Tim Andrews made between 1966 and 1970 as a singer for several mod bands and as a solo artist. Born Chris Andrews in Battersea, South London, Andrews started out in musical theater, where he played the Artful Dodger in both London and American productions of Oliver! beginning in 1962. After settling in London in 1965, Andrews began singing and playing guitar with two mod/freakbeat bands, the Gremlins and Les Fleur de Lys, with whom he recorded two sides for Polydor and Winwood, respectively, both of which are included here. Also included are several songs Les Fleur de Lys recorded for Columbia as Rupert's People, including the cult 1967 hit "Reflections of Charles Brown" and the excellent bluesy B-side, "Hold On." After going solo in 1967, Andrews changed his name to Tim to avoid confusion with a more established singer/songwriter at the time. It was as Tim Andrews that he paired with songwriter Paul Korda for a handful of baroque pop numbers, including "Angel Face" and "How Many More Hearts Must Be Broken," among others, all of which are featured here. Although Andrews' solo career never took off, at the time he was considered one of the best singers on the mod scene, and these recordings are stellar examples of soulful late-'60s British pop. All of which makes Something About Suburbia a must-have collection for fans of the genre. 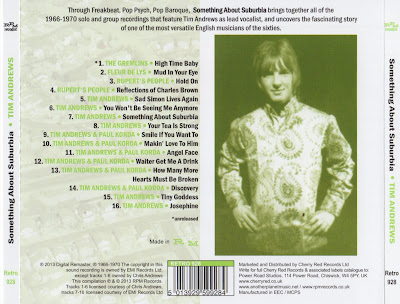