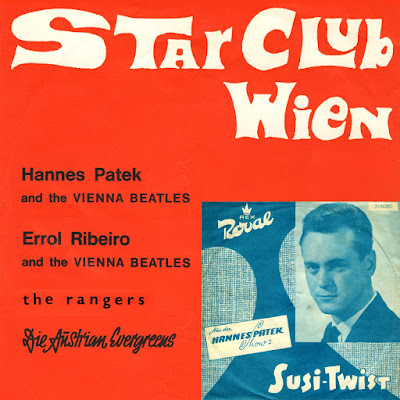 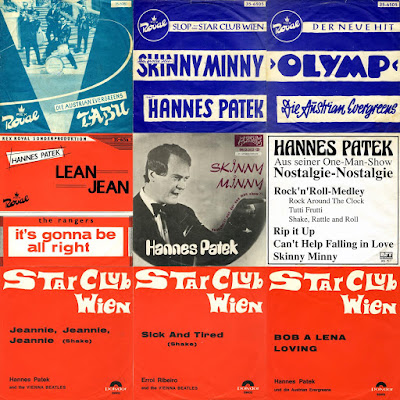 In the years 1961 to 1967, Vienna-born Rock-n-Roll legend Hannes Patek paved the way for many local teenage groups by promoting their shows on the stage of his weekly party series Star Club Wien. The accomplished typographer entered the show business at the very early age of 15 doing impersonations of popular actors and comedians before he realized his natural talent as a boisterous Rock-n-Roll singer. After performing a wild Little Richard cover version in the talent TV show “Teenagerparty”, Patek became a local celebrity, and took employment as regular host and conferencier at the above-mentioned youth club (which was sponsored by the Austrian Social Democratic Party). In addition, he acted as the booker of that venue, and invited local groups to play – the very first in-house bands being The Seven Ramblers, The Blue Gamblers (featuring a very young Horst Chmela as lead singer) and The Austrian Evergreens (1962–1965). Later, Star Club Wien eventually became a fixture of the Viennese Beat-circuit, staging three live-shows every week, and featuring legendary groups like The Counts, The Hubbubs, The V-Rangers or The Slaves among many, many others. Patek's own signature until the late 1960s were raw, hoarsely chanted Rock-n-Roll songs, preferably by Bill Haley, Eddie Cochran or Gene Vincent, some of which he also managed to wax for eternity. Widely classified as unsellable by the Austrian music industry back in the day, his performances as recording artist are unchallenged acts of pioneering, that remain among the rawest and hardest-to-find releases of the early Schnitzelbeat movement. Hannes Patek was a one hundred percent self-taught self-starter who didn't wait for a record company to knock on his door just in order to tame him into a soft, commercially-produced Schlager singer. On the contrary, he took care about these things all by himself, and made sure that all his recordings were as intoxicating and vibrant as the music he loved the most: Rebellious Rock-n-Roll. In late 1965, he invited the demented Vienna Beatles, to join him as backing band for his fifth 45, and literally tore down the wretched Symphonia recording studio: “Jeanny, Jeanny, Jeanny” is an incredibly tough rocker, and probably the most aggressive Austrian Rock-n-Roll-track in existence… Pure punk pioneering! We, the Trash Rock Archives, would like to express our gratitude for the unfaltering dedication to visionary underground music and take our hat off to the legacy of Hannes Patek. 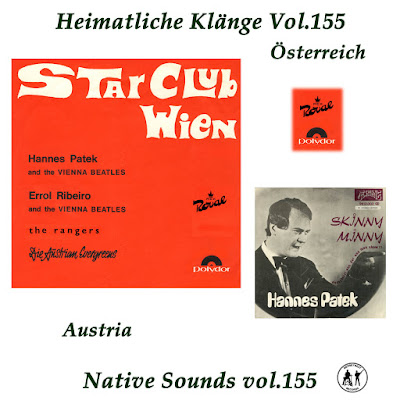