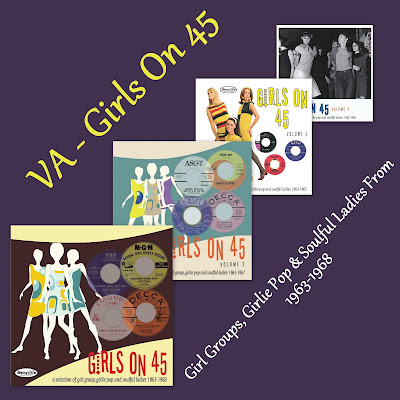 As the era when girl groups reigned, roughly 1963-1965, recedes further into the past as the years go on, time has had a way of bronzing the era's standout smash hits. Anyone getting hipped to girl groups for the first time will most likely stumble onto the Ronettes or the Crystals first, delving deeper into the Phil Spector catalog after that, or will possibly grow an affinity for the eerie sweetness of the Shangri Las or the Dixie-Cups' detached naive romanticism before discovering other artists on the Red Bird label. Girls on 45 is a stellar collection of girl group and vocal pop sounds from the golden years of 1963 to 1968, spotlighting almost unheard-of artists from a plethora of obscure 45 releases. The collection is well curated and sequenced, varying enough from song to song to ensure a good flow and avoiding cookie-cutter girl group sounds or direct ripoffs of bigger artists. Standout tracks include the dreamily dramatic "Better Off Without You" by Beverly Noble, Rosalind Madison's Northern soul ballad "Neighborhood Girl," and the loungy lilt of Joanie Sommers' "Never Throw Your Dreams Away," a song that aimed for pop star status with a Sandie Shaw-like delivery and almost imperceptible bossa nova touches in the orchestration. Sharon Marie's contribution, "Thinkin' 'Bout You Baby," may sound familiar to Beach Boys fans, as the early Brian Wilson/Mike Love composition flopped for Marie but was reworked by the Boys themselves as "Darlin'" on the Wild Honey album, melody intact but with different lyrics and approach. Girls on 45 tips a little closer to the orchestrated pop vocal side of things as it goes on, meandering from the Spector-ian huge drums and mono horn sections of "He's My Guy" by Jackie Burns & the Bo-Bells to the far slicker Bacharach-modeled "If You Must Break a Heart" by Vi Velasco. The variety reveals some tracks as weaker or less interesting than others at first, with the bombast of a huge, heartbroken girl group stomper sometimes overshadowing the subtlety of the breezier numbers here, but the obscurity of these songs means they'll all be new to most listeners. Girls on 45 has enough in the "lost gems" department to satisfy the most studied girl group fan and engage even the novice. 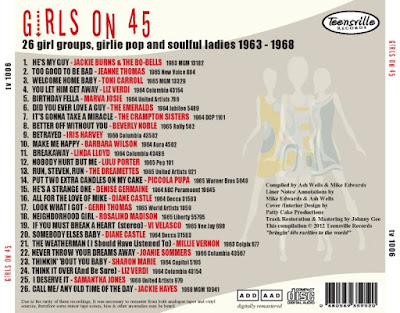 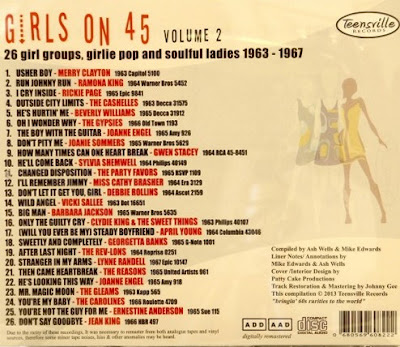 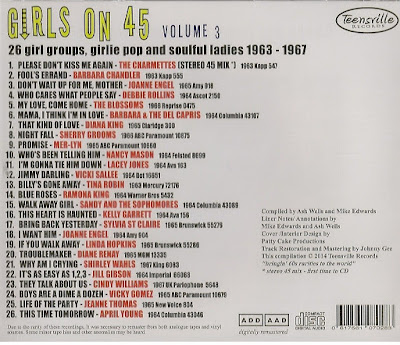 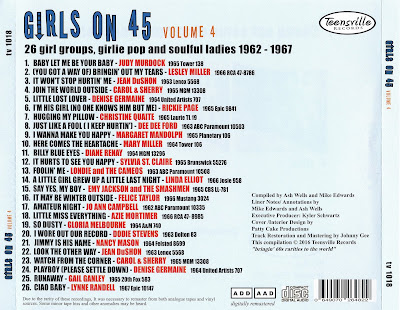