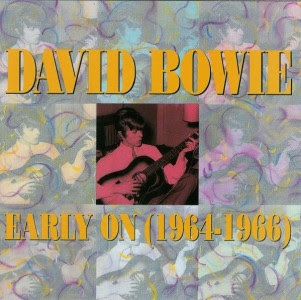 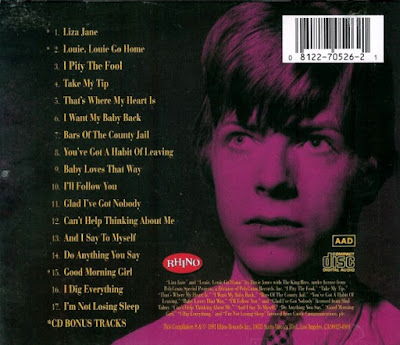 Early On (1964–1966) is a compilation album by David Bowie, released in 1991. It is notable because of it being the first and only attempt to compile a comprehensive collection of all of Bowie's pre-Deram material and encompasses multiple labels including Vocallion, Parlophone, and Pye. Tracks three and four are alternate versions to the official singles, while "Do Anything You Say" is also a different mix to the normal single. There are also five unreleased songs included that came from Shel Talmy's collection. Talmy produced Bowie's second and third single. A cassette version was released, however this omitted "Liza Jane", "Louie, Louie Go Home", and "Good Morning Girl".

Bowie began his recording career as Davie Jones, a variation of his birth name, David Robert Jones. His first single (tracks 1-2) was recorded with The King Bees. The B-side was also released by Paul Revere and the Raiders as "Louie, Go Home" in 1964.

Bowie switched to The Manish Boys for his second single (tracks 3-4). In February 1965, he switched again to The Lower Third (tracks 5-13). For his third single, he also changed his name to Davy Jones. To avoid confusion with The Monkees band member, he adopted the name David Bowie before his fourth single.

A financial dispute ended his relationship with The Lower Third on 28 January 1966. For his fifth single (tracks 14-15), he teamed up with The Buzz, who were uncredited on the release. Dissatisfied with the band's performance on tour, they were replaced with session musicians on Bowie's sixth single (tracks 16-17)

All tracks written by David Bowie, except "Liza Jane" by Leslie Conn, "Louie, Louie Go Home" by Mark Lindsay and Paul Revere, "I Pity the Fool" by Deadric Malone.