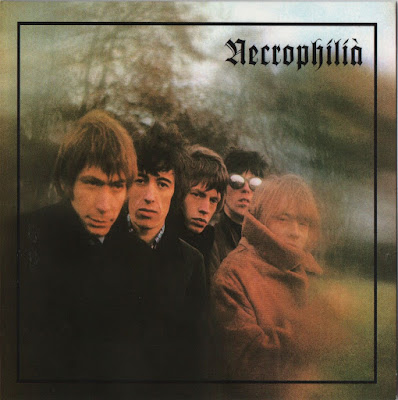 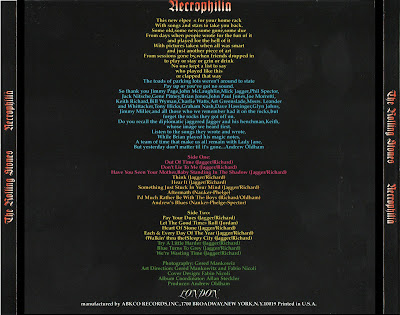 Here's an odd album: 1972's Necrophilia by The Rolling Stones. This album was never officially released, but the original proof cover art and very rare acetate were produced.

Originally intended as a follow-up release after the very successful Hot Rocks 1964-1971 compilation (it was the Stones' best-selling record at the time). Necrophilia was compiled by bassist Bill Wyman who picked out some very rare Stones song. Since most of the songs were not written by Mick Jagger and Keith Richards, Allen Klein (the Stones' ex-manager) stepped in and demanded more Jagger/Richards song, purely for monetary reasons.

So Necrophilia was scrapped and what emerged was More Hot Rocks (Big Hits & Fazed Cookies).

Obviously when bootlegs discovered the acetate and they started making and selling the vinyl, eventually releasing it on compact disc in 2002. One of the companies that released Necrophilia is called A Vinyl Gang Products. They mostly delt with live recordings, you can find out more about AVGP on rollingstonesnet.

The rare song that I'm going to use is "Andrew's Blues".

Here's some information about the song: it was written around February 1964 and credited to "Nanker Phelge" (a fictional name).

The name would guarantee the entire band to share the writing royalties. It came from a suggestion from guitarist, Brian Jones, who named it after a revolting face "nanker" and Jimmy Phelge's surname.

I believe the song is about Andrew Loog Oldham, who was the Stones' publicist at the time.  If you listen to the song, they even make reference to themselves from Andrew's point of view: