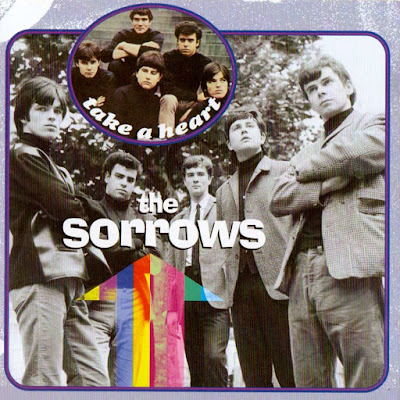 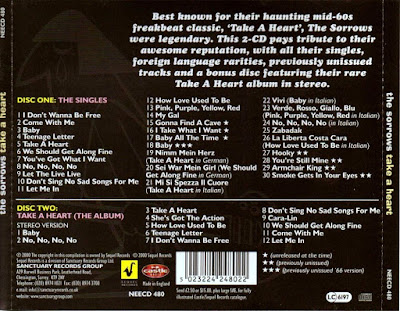 The Sorrows are a rock band formed in 1963 in Coventry, Warwickshire, England by Pip Whitcher, and were part of the British beat boom of the 1960s. They were a fixture in the English mod scene and are sometimes referred to as freakbeat.
The band was formed in 1963, and toured Germany for a month, playing several sets each day. The band's first recording was a version of "Smoke Gets in Your Eyes", recorded in Joe Meek's bathroom. They were signed by Pye subsidiary Piccadilly Records, and began working with producer John Schroeder. Their line-up included Fardon, Whitcher, Juckes, Packham and Finlay.

The Sorrows released their first album, Take a Heart, in 1965 on Piccadilly. The Sorrows played a hard, aggressive version of contemporary R&B; later this style of music was termed freakbeat.

After the band reached some minor chart positions on the UK Singles Chart, Phil Packham and Don Fardon left the group. Fardon had a UK chart hit with "Indian Reservation". Wez Price joined the group on bass guitar, Roger Lomas became lead guitarist, and Pip Whitcher did vocals. The band relocated to Italy, where they were moderately successful. Whitcher and Lomas later recorded at Air Studios under Mike Sullivan.

Lomas in the early 1980s became a record producer for his own company, ROLO productions, and produced 1980s ska bands such as Bad Manners. In 2003 Lomas produced the Grammy Award winning album, Jamaican E.T. for Lee "Scratch" Perry.