Vince Taylor The Rise and Fall 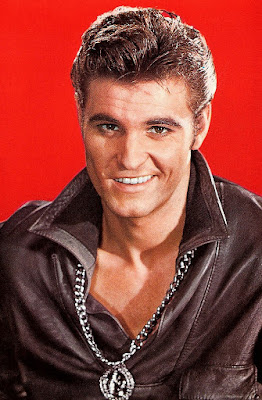 Original Ziggy - The Doomed Brit Rocker Who Inspired Bowie
* The death of David Bowie, coming like a lightning bolt from the blue, has gotten the world talking about his influence and legacy.

It's made me think about the people who influenced him - and in particular, a long forgotten British Rock n'Roller, one of the originals, who was the inspiration (or at least partly) for Ziggy Stardust.

This is the story of  Vince Taylor. And I think the story is worth telling.

Vince Taylor is from the Stone Age. The least fashionable era of British Rock and Pop Music, when the early pioneers who heard  the very earliest Yank Rock N'Roll - often on radio stations serving US servicemen in Europe - came up with a weird, mid-Atlantic take on the music.

They they look and attitude of Elvis, Carl Perkins, Eddie Cochrane and Gene Vincent and came up with a strange, ersatz copy, in the way the British-made cars of the era aped the Fins and Chrome look of Yank cars of the era on a smaller, more homely scale.

They were the likes of Cliff Richard and Johnny Kidd. And one of the biggest at the time - Rock n'Roll wildman Vince Taylor - is now virtually forgotten.

But every time you hear Bowie sing Ziggy, you are hearing the story of Vince, the Black Leather clad, chain-swinging maniac who was the first British Rock star, exploding at that moment between grey, post-war austerity and the birth of Beat Music and the Liverpool Sound.

As he explained in a BBC Documentary in the '90s - Bowie used to hang out with Taylor in London in the mid-60's when the singer was well past his brief, blazing hey-day.

By this stage, Taylor was pretty much out of his mind on drink and drugs. Bowie recalled how, Taylor would always carry maps around with him. And one day in a bar close to Charing Cross Road, Taylor took out one of the maps and started pointing to locations where UFOs would soon land.

The old Rocker had formed a theory that Jesus Christ was really an alien. Taylor had started doing gigs in old pubs dressed in white robes and telling bemused, sparse audiences that he was, in fact, Jesus Christ.  Taylor was convinced that there was a strong connection between himself, aliens and the Lord.

Bowie resurrected Vince Taylor in the early 70s, when Taylor’s flipped-out Rock n'Roll religion became one of the main ingredients of Ziggy.

Taylor was born in London, raised in the US and returned back home as a teenager just in time to catch the Rock n'Roll wave. As the wildly gyrating, black leather clad front-man for Vince Taylor & The Playboys, he shone very brightly, very briefly. His later life was a sort of slow descent, booze, drugs, bankruptcy, bad choices, ever diminishing crowds.

Vince, real name Brian Holden, was born in Isleworth, Middlsex just before the war. His father moved the family to the US in 1946 and in 1955, his sister married Joe Barbera, one half of the animation duo who produced huge cartoon series such as Captain Caveman and Wacky Races.

They moved to California, where the teenage Brian was exposed to early Rock n'Roll and started singing in bands. Inspired by Elvis and Gene Vince, he changed his name to Vince Taylor and decided to move back to Britain.

It was perfect timing. The late '50s saw Rock n'Roll explode in the UK and Vince, with his Black Leather & Swinging Chain Wildman act, was soon enjoying the first of a string of hits. With Elvis, Gene Vincent and Eddie Cochrane on the other side of the Atlantic, Vince Taylor was as close to the real thing as most teens and the music industry could get.

He was a big draw during the brief heyday of British Rock n'Roll. But saw his career fade in the UK. He remained popular in France and The Netherlands, as a sort of Anglophone Johnny Halliday, a throwback to the glory days of black leather and greased back hair.

Billed - with his band - as "Vince Taylor et ses Play-Boys", he lived much of the the rest of his life in France and Switzerland. By the '80s, he had largely kicked his drink and drug problems and was working as an aircraft mechanic, a period which he called "the happiest days of my life".

He died of cancer in 1991, aged 54 and is buried in Lausanne, Switzerland.

Vince is now virtually forgotten, except for those - like Bowie - who remembered him in his heyday.

A b-side of his from '59 - Brand New Cadillac - has been covered by many artists - including The Clash on London's Calling.

But as Van Morrison put it in his 1999 song "Goin' Down Geneva": "Vince Taylor used to live here/No one's even heard of him/Just who he was/Just where he fits in".