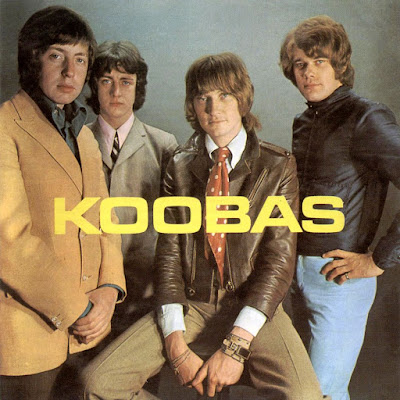 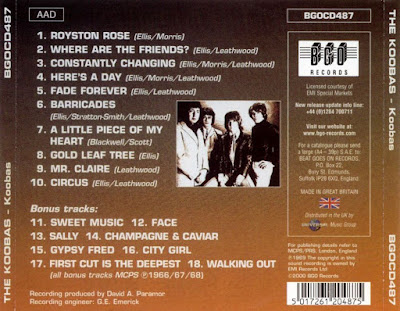 In a sense, it's unfair to rate Koobas entirely by this, their only LP, because they were already in the process of calling it quits as a group when they cut it late in 1968; indeed, it's likely that if they'd thought they would have a possible future, a couple tracks that are here might never have seen the light of day. That said, Koobas is a good document of its time: Its three best songs, "Royston Rose," "Barricades," and "Gold Leaf Tree" are resplendent in rippling guitar parts, lots of fuzz-tone, searing breaks that sound like George Harrison's or Tony Hicks' playing pumped up by a few hundred amps, and drum patterns lifted right out of "Rain" and a dozen equally impressive psychedelic tracks, and some very pretty singing. Unfortunately, the best parts of this album are juxtaposed with too many self-indulgent exercises in quaint nostalgia (which the Kinks could pull off but no one else in mid-'60s England ever could without looking silly) and psychedelic digressions like "Here's a Day" and "Fade Forever" (which, with its heavy Mellotron sound, recalls moments off of the Zombies' Odessey and Oracle without ever being as clever). Their rendition of "A Little Piece of My Heart" is closer in spirit to their older Pye singles and it is easily the best song on this album, as a descendant of their old R&B-based Liverpool sound. [Some reissues have added copious bonus tracks from the rest of their EMI/Columbia output circa 1966-1968.]

The Koobas were among the better failed rock bands in England during the mid-'60s. Their peers, among the most talented group of the early British beat boom never to make it, included the Roulettes, the Chants, and the Cheynes. Favorites of the press and popular for their live shows, they somehow never managed to chart a record despite a lot of breaks that came their way, including a tour opening for the Beatles, top management representation, and a contract on EMI-Columbia. The group was formed in 1962 by guitarist/singers Stuart Leathwood and Roy Morris, drummer John Morris (who was quickly succeeded by Tony O'Reilly), and bassist Keith Ellis, all of whom were veterans of Liverpool bands such as the Thunderbeats and The Midnighters. The band, known at one point as the Kubas, did a three week engagement at the Star-Club in Hamburg in December 1963 and out of that built up a serious reputation as performers. They had a sound that was comparable to the Beatles, the Searchers, and the Mojos, as Liverpool exponents of American R&B with a strong yet lyrical attack on their guitars and convincing vocals. It wasn't until after Brian Epstein signed them a year later, however, that a recording contract (with Pye Records) came their way. They got one false start through an appearance in the movie Ferry Cross the Mersey, starring Gerry & the Pacemakers, playing one of the groups that loses a battle-of-the-bands contest, but the Koobas' footage ended up being dropped from the final cut of the film. Their debut single, "I Love Her" b/w "Magic Potion," failed to chart, as did its follow-up, despite the exposure the group received opening for the Beatles on their final British tour.

Coming off of those nine shows, the group was booked into the most prestigious clubs in London and started getting great press, but two more singles failed to dent the charts in 1965 and 1966. They jumped from Pye Records to EMI-Columbia in 1966, and continued to get good, highly visible gigs, including a January 1967 appearance with the Who and the Jimi Hendrix Experience at the Savile Theatre (owned by Brian Epstein), and a tour of Switzerland with Hendrix. The group's sound was a lean yet melodic brand of R&B-based rock & roll, similar to the Beatles, though the Koobas didn't start to blossom as songwriters until fairly late, which may have been part of their problem. They recorded good-sounding and very entertaining songs, but somehow never connected with the right sound at the proper moment. By the middle of 1967, they'd altered their look and their sound, moving away from American-style R&B and toward psychedelia. The group members also began writing their own material, sometimes with help in the lyric department from their new manager, Tony Stratton-Smith. Their singles still utilized outside songwriters, however, and the group's best crack at the chart came early in 1968 when they recorded Cat Stevens' "The First Cut Is the Deepest," complete with heavy fuzz-tone guitar. Their single garnered some airplay but was eclipsed by P.P. Arnold's Top 20 version of the same song. Despite his best efforts, Stratton-Smith couldn't help the group overcome the failure of their last single. The quality of their gigs and the fees they were earning began declining, and their morale soon followed. By the end of 1968, the Koobas had agreed among themselves to go their separate ways. Ironically, the group's split coincided almost perfectly with Stratton-Smith's final effort on their behalf. Despite the failure of a succession of singles, EMI-Columbia agreed to let the band cut a long-player in late 1968. The group lasted just long enough to finish the album, Koobas, a mix of topical songwriting, psychedelia, R&B, and nostalgia that might've found an audience if only there had been a Koobas still together to tour behind it and promote the record in early 1969. Instead, by 1970 the album was already in the cut-out bins. Keith Ellis jumped to Van Der Graaf Generator and then Juicy Lucy (with whom he played on the major U.K. hit "Who Do You Love"), and later moved to Los Angeles. Stuart Leathwood became part of the duo Gary & Stu, with Gary Holton, and was later a member of the group March Hare. The Koobas' early work on Pye is effectively scattered over several CD releases, including Watch Your Step from Sequel Records. In the summer of 2000, Beat Goes On reissued their self-titled EMI-Columbia album with eight bonus tracks drawn from their early singles for the label, thus assembling their complete post-1966 work in one place for the first time.