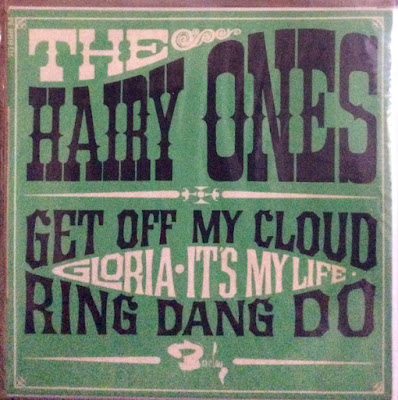 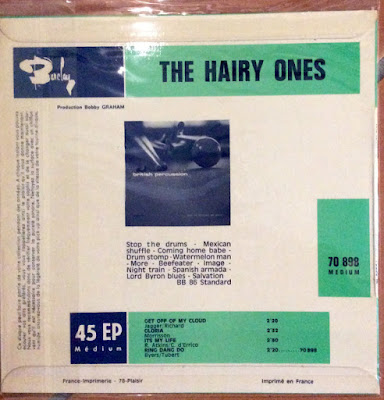 A British studio project put together in London, UK for a french EP. The same four songs were also issued as a pair of singles in Austria. The project is mostly remembered because of the later fame of the session musicians.

One of Bobby Graham's attempts to impress the French record buying public.
The four tracks "Gloria", "It's My Life", "Get Off My Cloud" and "Ring Dang Do" were played by a stellar line up:
Bobby Graham; Jimmy Page, lead guitar; John McLaughlin, rhythm guitar; Alan Weighel, bass; Kenny Salmon, organ.
The singer was Ray Merill from The Joe Loss Band.
He modified his BBC tones for rock 'n' roll - his absurd Eric Burdon impersonation on "It's my Life" has to be heard to be believed.
The Hairy Ones ‎– Get Off My Cloud
Label:
Barclay ‎– 70898
Format:
Vinyl, 7", 45 RPM, EP
Country:
France
Released:
1965
Genre:
Rock
Style:
Beat, Garage Rock

tags The Hairy Ones