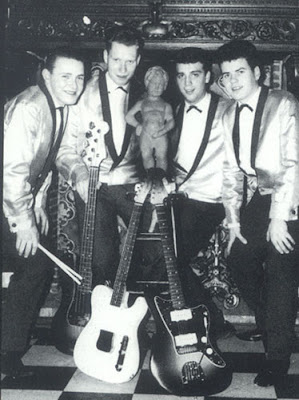 Biography
There are at least four Bands with the name "The Jokers".

1) The Jokers are a Rock & Roll band from Liverpool, England.

(Wrong The Jokers where from Antwerp , Belgium in the early 60's)

Debuted in 1963 with an adaptation of a traditional song (just as The Cousins did with Kili-Watch) : for them it was the folk-traditional "Ik zag Cecilia komen", (I say Ceilia coming) which became "Cecilia Rock" in their version.

The Jokers concentrated on the instrumental work, with Shadows-like songs as "Tabou", "Ronny Boy" and "Gemini Boogie". Guitar-player Ronny Sigo is called the Belgian Hank Marvin in "Wit-lof from Belgium". Their singles all shared a formula : a charming instrumental rock on the A-side, on the flipside a slow song, a mix between the Shadows and James Last.

They conquered Flanders easily, but also had success in Germany and Spain (where they recorded an album in stereo, a rarity for 1962). Even in Japan, where they released a Christmas-album, they became popular in the slipstream of the American band The Ventures. Worldwide, they have sold 850.000 copies of their albums.

Ronny Sigo is quoted as saying "We where very young when the success came. I was only 15 at the time. That's a hard thing to get to grips with at that age. With a better management and promotion, the Jokers would have been even bigger."

From 1967 they turned mellow and ended the group 2 years later.

Their debut album The Big Rock & Roll Show was mixed by Mike Fraser who has previously worked with Aerosmith, AC/DC, Van Halen, Metallica and Joe Satriani amongst others.

The band formed in 2006 with the aim of "creating the worlds greatest Rock & Roll band". A rather bold asperation, but The Big Rock & Roll Show is a mighty fine start

3) A 1960's surf band whose biggest hit was Purple Crackle