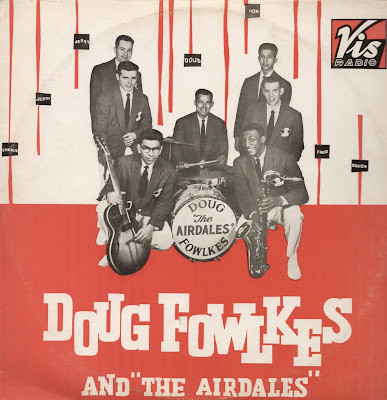 Band formed by drummer Doug Fowlkes. Line-up: Doug Fowlkes (drums), Don Borja (bass), Charles Barron (rhythm guitar), Jerry Armstrong (lead guitar), Fred Lawrence, (tenor sax), Bob Geven (baryton sax), Jerry Hendrix (piano), Rocky Roberts (vocals).
After 1963, see Rocky Roberts & The Airedales.
Partial history by Jerry Armstrong (guitar player):
"We formed the group while serving in the U.S. Navy at Boca Chica Naval Air Station, Key West Florida. We first practiced in the old base theater, beginning our trek in 1958. In 1959 we were transferred to the U.S.S. Independence, CVA-62 (Aircraft Carrier) and served aboard her until we were all discharged in 1962. We made two trips to Europe on the Indy and during the first trip entered a rock and roll contest in France and won first place. Eddie Barclay, the International Banker, saw us and liked us and signed us to a recording contract with his Barclay Records label. We later recorded for ATCO in New York City. While the band did well up and down the East Coast of the U.S. from Key West to New York City, we were most popular in Europe, with France, Greece, and Italy being countries that most favored our music. We cut several albums and EPs. In 1963, the band split and members went separate ways. Rocker Roberts took the band's name and went back to Europe where he did very well in the music business with new members. Most of us went on to other careers. I played guitar with various groups for a while. However, I retired from the Federal Government after 30 years as a personal officer and family support center director, having earned degrees in psychology and counseling. Don Borja, the bass player also made a career working with the government and designed many of the emblems and symbols used in the government today, including the seal of the department of defense. Charlie Barron became a music teacher (Piano). My attempts to contact Jerry Hendrix, Fred Lawrence, and others have been without success. While we did go back to Key West and perform on a couple of occasions, we actually left there in 1959 and never returned there except for two performances--I believe about 1960/61. We were front band for Bobby Darren on one of those trips, playing at a large music hall at Biscayne Park. The performances in Key West included members of the Grand Ole Opry (Little Jimmy Dickens, Cowboy Copas, Hank Locklin, and a few others)."2] before it "bubbled under" at #120 on the Billboard Hot 100 on March 13, 1961 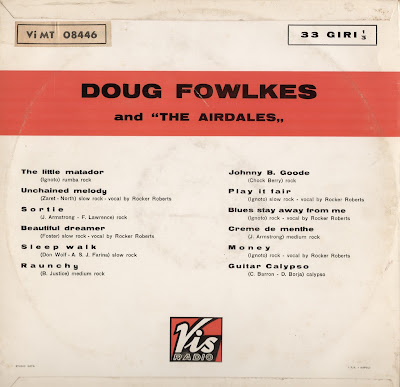