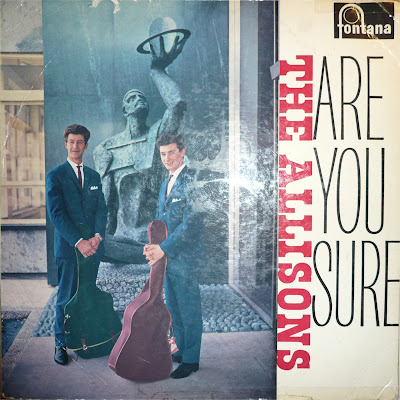 The Allisons are one of the best-loved of all Britain's Eurovision Song Contest entries despite never having won the event; they finished second in the 1961 competition. Originally a duo of Brian Alford and John White, the roots of the Allisons sprang from the remains of a southwest London youth club band called the Shadows (again, no relation to the better-known instrumental combo). Originally performing as the Shadows Brothers, the pair were popular enough to appear on the television talent show Television Discoveries in 1958, but White quit in early 1959, and Alford attempted a solo career. By late summer 1959, however, he had teamed up with Colin Day and they took the new name -- changing their own surnames accordingly.

By 1960, the Allisons were performing at the legendary Bread Basket coffee bar, and later that year a demo tape of Alford's own compositions reached the ears of Fontana Records, which promptly entered one of the songs, "Are You Sure," for the U.K.'s Eurovision heats. Held just a month after the Allisons turned professional, the song was a runaway triumph at the regional contest, and remains one of the most deserving also-rans in the entire history of Eurovision. The single of "Are You Sure" reached number two on the U.K. chart in spring 1961, but follow-ups "Words" and "Lessons in Love" barely scratched the Top 40 and, by the mid-'60s, the duo had split. Alford continued as a son***gwriter, however, and occasionally convened new Allisons lineups, not only alongside Day, but also with other singers -- Mike Allison and Tony Allison both appeared alongside Alford over the years