The Tornados -Telstar: The Original Sixties Hits of the Tornados 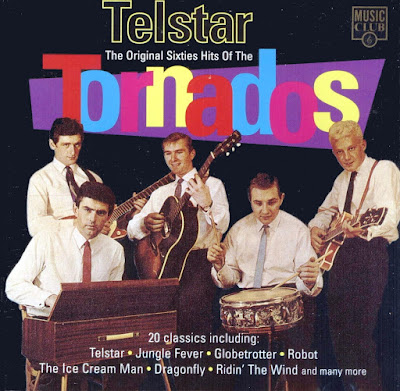 One of the saddest stories in rock & roll history surrounds the Tornados, an instrumental group from Britain. Although there were other groups with the same name (see listing for their American surf-band counterparts), this batch of Tornados were the creation of British producer Joe Meek. Meek was England's first independent producer, being equal parts Thomas Edison, Phil Spector, and Ed Wood. An inveterate tinkerer, he designed his own compression units and microphone pre-amps, giving his productions their own distinct sound. Setting up a homemade studio in a three-story flat on Holloway Road in London, Meek pioneered such recording techniques as close miking of instruments, distortion, his aforementioned trademark compression, loud drums fortified by percussion from pocket combs, milk bottles, and stomping the floorboards himself. He put together the original Tornados in late 1961 as a studio session group, its original lineup consisting of Alan Caddy and George Bellamy on guitars, Roger LaVern on organ, Heinz Burt on bass, and Clem Cattini on drums. After one single flopped, Meek had the group do one of his compositions, an instrumental called "Telstar." Utilizing willful distortion, cheap tape echo, beeping satellite sound effects, a cheesy-sounding Clavioline (a two-octave keyboard powered by a battery), and massive amounts of tube compression, the resulting production sounded like nothing else at the time, or since. It became the first number one record on the American charts by a British rock group and ended up selling five million copies worldwide. It should have made Meek a millionaire and the Tornados a household name. But a French copyright infringement suit kept all royalties tied up for six years, and the Tornados were kept from touring the United States behind their international hit due to a contract employing them as a backup group to U.K. pretty boy Billy Fury. By the time the dust settled, the Tornados had gone hitless for several years, and so had Joe Meek. After numerous personnel changes, the original members scattered to various groups, Heinz Burt starting his own solo career and Cattini becoming a British session mainstay of producer Shel Talmy. The copyright infringement suit was ruled in Meek's favor six years later, a year after he had blown his face off with a hunting rifle after murdering his landlady, ending his life in his beloved but debt-ridden studio. 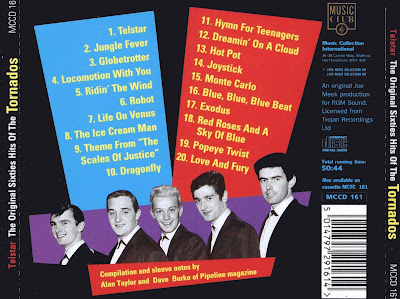 This is the kind of compilation that EMI later became well known for, pairing off A- and B-sides, and it's probably the best way to follow the development of the Tornados on a single CD, although the tracing is a bit difficult, owing to the fact that the order is a bit shuffled. The producers have elected to put the group's first and biggest hit, "Telstar," out in front with its B-side and shift the group's failed preceding single, "Popeye Twist" b/w "Love and Fury," to the final two slots on the 18-song CD. Everything else is more or less in chronological order, although they've busted up the order of the U.K. singles by inserting the U.S.-generated single "Ridin' the Wind" into the lineup, but as it's similar to "Telstar," no one's likely to mind. It's fascinating to try and perceive (and understand) the differences between the two countries' audiences and airwaves -- while "Ridin' the Wind," for all of its similarities to "Telstar," only reached number 63 on the U.S. charts, tracks like "Globetrotter," "Robot," and "The Ice Cream Man" shot well into the Top 20 (or even the Top Ten) in England and stayed on the charts for months; oddly enough, the latter instrumental bears some similar characteristics to an Elvis Presley hit, the Doc Pomus/Mort Shuman-authored "His Latest Flame," which had charted two years earlier. Beyond this point in their history, the group's fortunes turned decidedly downward, due to the departure of various key members, starting with bassist Heinz Burt, though their sound remained intact, and a lot of what's here is nothing less than gorgeous. "Dreamin' on a Cloud," "Honey Pot," "Joystick," and others all display the group's distinctive metallic/melodic sound, built around memorable hooks and strong playing; but despite the quality of their work, one gets the sense that after 1963 they were being outmanned and outgunned by the Beatles, the Rolling Stones, the Dave Clark Five, and such bands for the attention of listeners and space on the airwaves. Contrary to what the notes claim, the one odd LP track in their output, "All the Stars in the Sky" from the movie (and soundtrack album) Just For Fun, is not present on this reviewer's copy or any other copy he has seen, although one can get that track on the Repertoire Records double-CD set Telstar: The Complete Tornados. That flaw aside, the annotation is excellent and the whole CD is a lightweight delight with decidedly heavier-weight musical allure. For seven out of ten potential listeners, it'll be all you could possibly want to hear.