canadian teen pop singer was a singer in the 1960s who rose to fame with a novelty hit in 1964, "My Boyfriend Got a Beatle Haircut." She sang another novelty number called, "That's Me, I'm the Brother" that represents the LOL humor of songs of that era.
Also was known "in the day" for singing "I'd Much Rather Be With the Girls" and "There Goes the Boy I Love With Mary."
Sadly her music was forgotten by most but she still has a small and loyal fan base.

is an American pop singer who released four singles on Capitol Records in 1961 and 1962, and was at one time the youngest artist signed to a major record label in the United States.[1] Clark's best known recording was her debut single, the novelty song "Daddy, Daddy (Gotta Get A Phone In My Room)", which was released on January 9, 1961,[1] reached #1 on radio station WHYN in Springfield, Massachusetts on March 4, 1961,[2] before it "bubbled under" at #120 on the Billboard Hot 100 on March 13, 1961 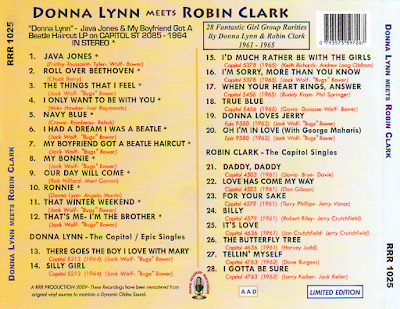