Hits From The Ivy League, The Rockin'Berries & The Sorrows (1966) 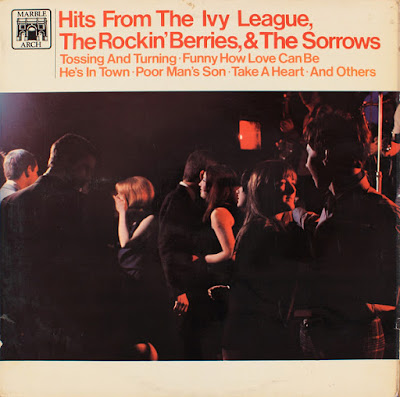 The Ivy League
'60s British pop trio the Ivy League consisted of members John Carter, Ken Lewis (previous members of Carter-Lewis and the Southerners), and Perry Ford. All three members were session singers who possessed high-pitched singing voices, forming the group in 1964. Although an initial single quickly disappeared from sight, their second single, "Funny How Love Can Be," turned out to be a surprise U.K. Top Ten hit. Further hits followed, including "That's Why I'm Crying" and a cover of "Tossin' And Turnin'," the latter of which hit number three on the U.K. charts. The original trio managed to only release a single full-length album, 1965's This Is the Ivy League, before both Carter and Lewis left the group a year later. With replacement members Tony Burrows and Neil Landon taking the recently departed original members' places, the Ivy League issued two more full-lengths, 1967's Sounds of the Ivy League and 1969's Tomorrow Is Another Day. They scored another minor hit, "Willow Tree," before changing their name to the Flowerpot Men. In the '80s, fans of the group were confused by a band going by the name of the Ivy League which performed the group's hits at nightclubs, even though none of the group's earlier members were involved. During the '90s, several best-of compilations surfaced, including 1998's 43-track Major League: the Collectors' Ivy League.


Despite a couple of British Top Ten hits in 1964-1965, the Rockin' Berries made no dent in the U.S. market at the height of the British Invasion. Much of the Berries' output reflected the lighter pop/rock face of the British beat boom, emphasizing catchy, carefully constructed tunes supplied by British and American songwriters, with high harmonies indebted to the Four Seasons and the Beach Boys. The Berries wrote little of their own material, and this, combined with the wimpiness of some of their recordings, doomed them to little recognition, and little critical respect, even among British Invasion aficionados. For what they were, however, their best pop/rock outings were pretty respectable. A career strategy that put an eye on the "all-around entertainer" niche, however, led them to record many comedy numbers that have dated excruciatingly badly, and also ensured that they were denied artistic credibility and would fall out of the British charts after the mid-'60s.

The Rockin' Berries were formed in the early '60s when guitarist Brian "Chuck" Botfield was performing with the Bobcats, a Birmingham band, at the Star Club in Hamburg. Several Bobcats (including singer Jimmy Powell, who went on to record with the Five Dimensions in the '60s) broke off to form their own band, and Botfield brought in some Birmingham friends to regroup as the Rockin' Berries. Vocal arrangements were the Berries' forte, with Clive Lea taking the harder-rocking stuff and falsetto-voiced Geoff Turton pacing their most famous, Four Seasons-influenced material.

After a couple of flop singles for Decca in 1963, the Rockin' Berries signed with the Pye subsidiary Piccadilly. After a mild hit with a cover of the Shirelles' "I Didn't Mean to Hurt You," their cover of the Tokens' "He's in Town," penned by star songwriting team Gerry Goffin and Carole King, took them to number three in the British charts in late 1964. "He's in Town" was a gentle harmony number, like a less shrill Four Seasons, and the group turned to another cover of an American record, the Reflections' "Poor Man's Son," for their follow-up. More somber than "He's in Town," this made number five in the U.K.. At around the same time, the Berries' debut LP, In Town, with a manic variety of material encompassing operatic ballads, R&B, harmony pop/rock, comedy, and the German "Ich Liebe Dich," was a fair success in Britain, making number 15.

The Rockin' Berries' versatility, though a boon to their live work in enabling them to play more mainstream theaters and cabarets than some British Invasion acts, worked against them on record. They would frequently insert comic routines into their live shows, and their second album, Life Is Just a Bowl of Berries, was half-occupied by terrible novelty/comedy numbers. They continued to record pop/rock by professional tunesmiths on their singles, including Goffin-King's "You're My Girl," material by British hitmakers John Carter, Ken Lewis, and Perry Ford (who were also writing and recording hits as the Ivy League at the time), and even a little-known tune co-written by a pre-Blues Project Al Kooper, "The Water Is Over My Head." Goffin-King's "You're My Girl" (which, like their "He's in Town," was first given to the Tokens) and "The Water Is Over My Head" were minor British hits in 1965, but after that there was no chart success for the band. They continued to get work on the cabaret circuit and record singles for Piccadilly and Pye through 1968, when Turton left for a solo career, getting a Top 30 hit in the U.S. in early 1970 under the name of "Jefferson" (with "Baby Take Me in Your Arms"). Turton eventually rejoined the still-active Rockin' Berries, who continued to play cabaret for the rest of the century and make some more recordings.

The Sorrows
One of the most overlooked bands of the British Invasion, the Sorrows offered a tough brand of R&B-infused rock that recalled the Pretty Things (though not as R&B-oriented) and the Kinks (though not as pop-oriented). Their biggest British hit, "Take a Heart," stopped just outside the U.K. Top 20; several other fine mid-'60s singles met with either slim or a total lack of success. With the rich, gritty vocals of Don Fardon, taut raunchy guitars, and good material (both self-penned and from outside writers), they rank as one of the better British bands of their era, and certainly among the very best never to achieve success of any kind in the U.S. After their sole LP (also titled Take a Heart), they issued a couple of singles with psychedelic and Dylanesque overtones, and had somehow relocated to Italy in the late '60s, where they played out their string with material in a much more progressive (and less distinctive) vein. Don Fardon had a Top 20 hit in America with a pre-Raiders version of "Indian Reservation" in 1968. 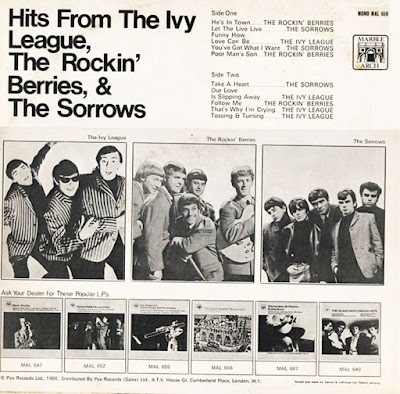 WANTED
THE EXCHECKERS /
THE LIVERPOOL BEATS
MERSEY SOUND FROM CHESTER 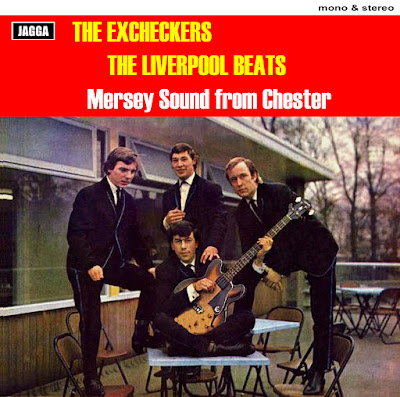