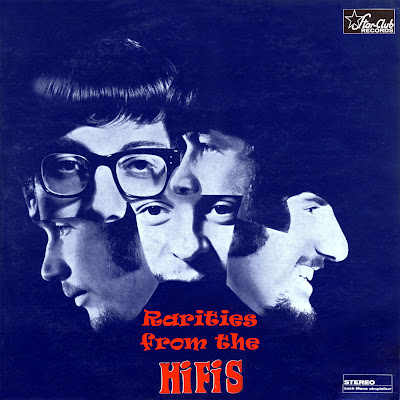 One of the finest examples of the beat-bands-go-bonkers syndrome, the psychedelic pop album Snakes and Hi-Fis was released in Germany in mid-1967 by exiled British group the Hi-Fis, and has long been established as a highly sought after rarity on the worldwide beat/psych collectors market.

The Hi-Fi's were a London-based band that tried for two years to break out of clubs with some recording success, cutting sides for Piccadilly and Pye, including a catchy singalong called "Will You or Won't You," which managed to be salacious and innocent at the same time, and the more energetic "She's the One," and also did well by Leiber & Stoller's "I Keep Forgettin'." It was all to no avail as the group went hitless into 1967, dropped from their third label in as many years, and headed for the more lucrative environs of Hamburg, Germany, where English bands were still treated as special. Their singles cut in Germany failed, but they still got to record an entire LP. 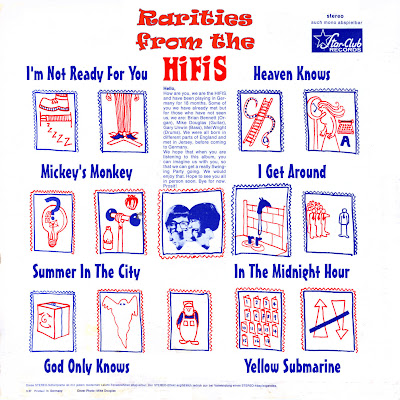 "...The HiFis were a wonderful mid 60s  London-based group that would eventually relocate to Germany and release the above Star-Club lp in 1967.  Prior to the LPs release, the HiFis (also known as the Hi-Fi’s) also released a series of singles.  These singles were more in a soul beat style though some of them are pretty good and worth seeking out.  Their lineup consisted of Brian Bennett (vocals and keyboards), Mike Douglas (vocals and guitars),  Malcolm Lenny (vocals and lead guitar), Gary Unwin (bass), and Mel Wright (drums).

Many UK groups would relocate to countries such as Germany or Italy because being a British Invasion group that played original rock n roll was seen as something special abroad.  Many of these groups like the Rokes, the Primitives, and the Sorrows (a really excellent group) would see great success and sell lots of records.  The HiFis did pretty well in Germany and were a popular live group.  This success allowed them to record their only album, Snakes and HiFis.  I have seen other magazines describe the lp as “a brilliant mixed bag of an lp” or “one of the finest examples of the beat-bands-go-bonkers syndrome.”  I have even heard some compare the HiFi’s guitar and rhythm section to that of the legendary Monks (a funhouse effect in which everything seems about ready to fall apart but the band pulls thru in the end to keep things together).  I agree with all these comparisons though it’s really hard to put a label on the HiFis, they were pretty unique.

There are several great tracks on Snakes and HiFis: Tread Softly For The Sleepers (a great chunky mod psych track that reminds me of late period Action), Snakes and Ladders, What’s A Bulb, I’m A Box, Calorie Ann (soaring vocals and whacked out lyrical concerns), Odd Man Out, You’re Haunting Me, My Cards Numbered 17, and the awesome but strange Uwe Aus Duisburg.  Just by looking at these titles one can tell that this music is NOT the typical beat psych fare.  As mentioned before, this lp was recorded at a time when beat groups were experimenting with different sounds and turning to psychedelia, so there’s a bit of an advanced mid-60s sound – short 2 minute pop songs with a freaky edge.  For those of you who love the Kinks, the Idle Race, the Move, the Tages and the Ro-d-y’s (a great group from the Netherlands), you’ll love this reissue (the 2008 Wooden Hill cd version to be exact).  Standout picks on my end are the buzzing organ psych of What’s a Bulb, which is an absolutely brilliant track, and Uwe Aus Duisburg.  The latter track vaguely reminds me of The Move with its galloping tempo and gonzoid lyrics – it’s a track that would fit in well with today’s modern indie radio stations.  Other good ones are the Pet Sounds influenced You’re Haunting Me and the truly bizarre I’m A Box.  Both of these tracks carry a unique mellow buzz and one may also note that I’m A Box was strangely released as a single (this track had no hit potential whatsoever).  Wooden Hill reissues are usually limited, so pick one up if you can.  Snakes and HiFis is definitely an obscure gem and a must hear for fans of Brit psych...."
~ by Jason