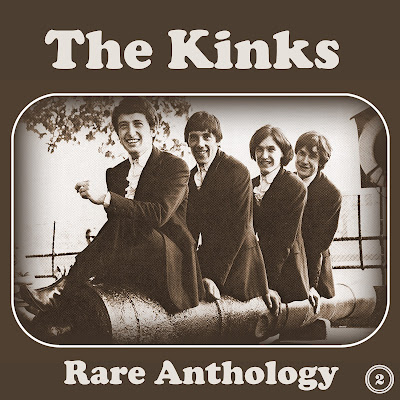 Although they weren't as boldly innovative as the Beatles or as popular as the Rolling Stones or the Who, the Kinks were one of the most influential bands of the British Invasion. Like most bands of their era, the Kinks began as an R&B/blues outfit. Within four years, the band had become the most staunchly English of all their contemporaries, drawing heavily from British music hall and traditional pop, as well as incorporating elements of country, folk, and blues.
Throughout their long, varied career, the core of the Kinks remained Ray (born June 21, 1944) and Dave Davies (born February 3, 1947), who were born and raised in Muswell Hill, London. In their teens, the brothers began playing skiffle and rock & roll. Soon, the brothers recruited a schoolmate of Ray's, Peter Quaife, to play with them; like the Davies brothers, Quaife played guitar, but he switched to bass. By the summer of 1963, the group had decided to call itself the Ravens and had recruited a new drummer, Mickey Willet. Eventually, their demo tape reached Shel Talmy, an American record producer who was under contract to Pye Records. Talmy helped the band land a contract with Pye in 1964. Before signing to the label, the Ravens replaced drummer Willet with Mick Avory.
the Ravens recorded their debut single, a cover of Little Richard's "Long Tall Sally," in January 1964. Before the single was released, the group changed their name to the Kinks. "Long Tall Sally" was released in February of 1964 and it failed to chart, as did their second single, "You Still Want Me." The band's third single, "You Really Got Me," was much noisier and dynamic, featuring a savage, fuzz-toned two-chord riff and a frenzied solo from Dave Davies. Not only was the final version the blueprint for the Kinks' early sound, but scores of groups used the heavy, power chords as a foundation. "You Really Got Me" reached number one within a month of its release; released on Reprise in the U.S., the single climbed into the Top Ten. "All Day and All of the Night," the group's fourth single, was released late in 1964 and it rose all the way to number two; in America, it hit number seven. During this time, the band also produced two full-length albums and several EPs.
Not only was the group recording at a breakneck pace, they were touring relentlessly, as well, which caused much tension within the band. At the conclusion of their summer 1965 American tour, the Kinks were banned from re-entering the United States by the American government for unspecified reasons. For four years, the Kinks were prohibited from returning to the U.S., which not only meant that the group was deprived of the world's largest music market, but that they were effectively cut off from the musical and social upheavals of the late '60s. Consequently, Ray Davies' songwriting grew more introspective and nostalgic, relying more on overtly English musical influences such as music hall, country, and English folk, than the rest of his British contemporaries. the Kinks' next album, The Kink Kontroversy, demonstrated the progression in Davies' songwriting. "Sunny Afternoon" was one of Davies' wry social satires and the song was the biggest hit of the summer of 1966 in the U.K., reaching number one. "Sunny Afternoon" was a teaser for the band's great leap forward, Face to Face, a record that featured a vast array of musical styles. In May of 1967, they returned with "Waterloo Sunset," a ballad that reached number two in the U.K. in the spring of 1967.
Released in the fall of 1967, Something Else by the Kinks continued the progressions of Face to Face. Despite the Kinks' musical growth, their chart performance was beginning to stagnate. Following the lackluster performance of Something Else, the Kinks rushed out a new single, "Autumn Almanac," which became another big U.K. hit for the band. Released in the spring of 1968, the Kinks' "Wonderboy" was the band's first single not to crack the Top Ten since "You Really Got Me." They recovered somewhat with "Days," but the band's commercial decline was evident by the lack of success of their next LP. Released in the fall of 1968, The Village Green Preservation Society was the culmination of Ray Davies' increasingly nostalgic tendencies. While the album was unsuccessful, it was well received by critics, particularly in the U.S.

Peter Quaife soon grew tired of the band's lack of success, and he left the band by the end of the year, being replaced by John Dalton. In early 1969, the American ban upon the Kinks was lifted, leaving the band free to tour the U.S. for the first time in four years. Before they began the tour, the Kinks released Arthur (or the Decline and Fall of the British Empire). Like its two predecessors, Arthur contained distinctly British lyrical and musical themes, but it was a modest success. As they were recording the follow-up to Arthur, the Kinks expanded their lineup to include keyboardist John Gosling. The first appearance of Gosling on a Kinks record was "Lola." Featuring a harder rock foundation than their last few singles, "Lola" was a Top Ten hit in both the U.K. and the U.S. Released in the fall of 1970, Lola vs. the Powerman and the Money-Go-Round, Part One was their most successful record since the mid-'60s in both the U.S. and U.K., helping the band become concert favorites in the U.S.

The band's contract with Pye/Reprise expired in early 1971, leaving the Kinks free to pursue a new record contract. By the end of 1971, the Kinks had secured a five-album deal with RCA Records, which brought them a million dollar advance. Released in late 1971, Muswell Hillbillies, the group's first album for RCA, marked a return to the nostalgia of the Kinks' late-'60s albums, only with more pronounced country and music hall influences. The album failed to be the commercial blockbuster RCA had hoped for. A few months after the release of Muswell Hillbillies, Reprise released a double-album compilation called The Kink Kronikles, which outsold their RCA debut. Everybody's in Showbiz (1973), a double-record set consisting of one album of studio tracks and another of live material, was a disappointment in the U.K., although the album was more successful in the U.S.

In 1973, Ray Davies composed a full-blown rock opera called Preservation. When the first installment of the opera finally appeared in late 1973, it was harshly criticized and given a cold reception from the public. Act 2 appeared in the summer of 1974; the sequel received worse treatment than its predecessor. Davies began another musical, Starmaker, for the BBC; the project eventually metamorphosed into Soap Opera, which was released in the spring of 1975. Despite poor reviews, Soap Opera was a more commercially successful record than its predecessor. In 1976, the Kinks recorded Davies' third straight rock opera, Schoolboys in Disgrace, which rocked harder than any album they released on RCA.

During 1976, the Kinks left RCA and signed with Arista Records. On Arista, the band refashioned themselves as a hard rock band. Bassist John Dalton left the group near the completion of their debut Arista album; he was replaced by Andy Pyle. Sleepwalker, the Kinks' first album for Arista, became a major hit in the U.S. As the band was completing the follow-up to Sleepwalker, Pyle left the group and was replaced by the returning Dalton. Misfits, the band's second Arista album, was also a U.S. success. After a British tour, Dalton left the band again, along with keyboardist John Gosling; bassist Jim Rodford and keyboardist Gordon Edwards filled the vacancies. Soon, the band was playing arenas in the United States. Even though punk rockers like the Jam and the Pretenders were covering Kinks songs in the late '70s, the group was becoming more blatantly commercial with each release, culminating in the heavy rock of Low Budget (1979), which became the group's biggest American success, peaking at number 11. the Kinks' next album, Give the People What They Want, appeared in late 1981; the record peaked at number 15 and went gold. For most of 1982, the band was on tour. In spring of 1983, "Come Dancing" became the group's biggest American hit since "Tired of Waiting for You," thanks to the video's repeated exposure on MTV; in the U.S., the song peaked at number six, in the U.K. it climbed to number 12. State of Confusion followed the release of "Come Dancing," and it was another success, peaking at number 12 in the U.S. For the remainder of 1983, Ray Davies worked on a film project, Return to Waterloo, which caused considerable tension between himself and his brother. Instead of breaking up, the Kinks merely reshuffled their lineup, but there was a major casualty: Mick Avory, the band's drummer for 20 years, was fired and replaced by Bob Henrit. As Ray finished post-production duties on Return to Waterloo, he wrote the next Kinks album, Word of Mouth. Released in late 1984, the album was similar in tone to the last few Kinks records, but it was a commercial disappointment and began a period of decline for the band; they never released another record that cracked the Top 40.

Word of Mouth was the last album they would record for Arista Records. In early 1986, the band signed with MCA Records in the U.S., London in the U.K. Think Visual, their first album for their new label, was released in late 1986. It was a mild success but there were no hit singles from the record. The following year, the Kinks released another live album, appropriately titled The Road, which spent a brief time on the charts. Two years later, the Kinks released their last studio record for MCA, UK Jive. During 1989, keyboardist Ian Gibbons left the band. the Kinks were inducted into the Rock & Roll Hall of Fame in 1990, but the induction did not help revive their career. In 1991, a compilation of their MCA records, Lost & Found (1986-1989), appeared, signalling that their contract with the label had expired. Later in the year, the band signed with Columbia Records and released an EP called Did Ya, which didn't chart. the Kinks' first album for Columbia, Phobia, arrived in 1993 to fair reviews but poor sales. By this time, only Ray and Dave Davies remained from the original lineup. In 1994, the band was dropped from Columbia Records, leaving the group to release the live To the Bone on an independent label in the U.K.; the band was left without a record label in the U.S.
Despite a lack of commercial success, the band's public profile began to rise in 1995, as the group was hailed as an influence on several of the most popular British bands of the decade, including Blur and Oasis. Ray Davies was soon on popular television shows again, acting as these band's godfather and promoting his autobiography, X-Ray, which was published in early 1995 in the U.K. Dave Davies' autobiography, Kink, was published in the spring of 1996. 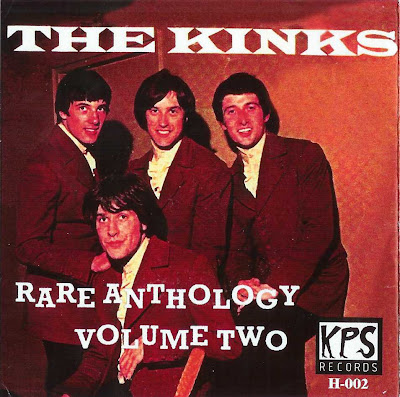 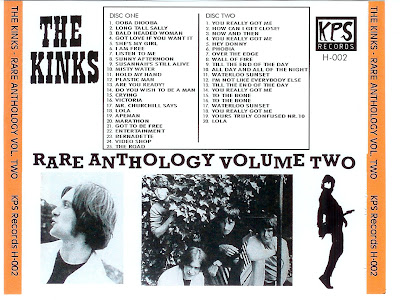