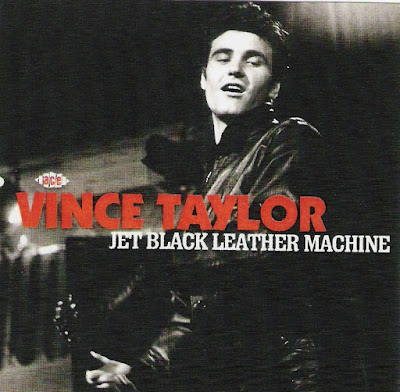 Vince Taylor will most likely be remembered for being the model for David Bowie's Ziggy Stardust character, his 1958 B-Side "Brand New Cadillac" (later covered famously by the Clash), and for his erratic on-stage and off-stage behavior as much as for his actual musical contributions to rock & roll, but as Bowie undoubtedly realized, if Taylor hadn't existed, he would have had to have been invented, which, in fact, he was. Born Brian Maurice Holden on July 14, 1939 in Isleworth, Middlesex, England, Taylor's family moved to New Jersey when he was seven years old. Around 1955, after Taylor's sister married future Hanna/Barbera cartoon mogel Joe Barbera, the family moved again, this time to California where Taylor ended up attending Hollywood High School. At 18 he fell in love with the high-energy music of Elvis Presley and Gene Vincent and tried his hand at singing, doing several local amateur gigs. Accompanying his brother-in-law Barbera to London on a business trip, Taylor checked out the rock & roll scene there, meeting drummer Tony Meehan and bassist Tex Makins at a coffee bar where Tommy Steele was playing. In a scene straight out of a bio pic, the three agreed to form the Playboys, and Taylor, realizing that Brian Holden wasn't the ideal stage name, plucked the name Vince from the side of a Pall Mall cigarette pack and officially became Vince Taylor, rebel rocker. That initial version of the Playboys didn't last long, though (none of Taylor's various incarnations of the band lasted very long, due in no small part to his often difficult and diffident manner, not to mention his drug use, and he was actually fired from the band on at least one occasion), but a revamped and expanded lineup recorded "I Like Love" and "Right Behind You Baby" for Parlophone Records in 1958, following that single with another, "Pledgin' My Love" b/w "Brand New Cadillac," later that same year. Neither single performed as expected, and Parlophone let the band go. Taylor and the Playboys moved to Palette Records and released "I'll Be Your Hero" b/w "Jet Black Machine" for the new label in 1960. Following a pair of striking performances in Paris, with Taylor dressed in his now-trademark black leather stage gear, Eddie Barclay of Barclay Records signed Taylor to a six-year recording deal. Taylor became a major player on the French rock & roll scene, looking the part of a rebel rocker maybe even more than he performed at it. This version of Taylor and the Playboys recorded five EPs and an LP for the Barclay label and topped bills as they toured the country. The off-stage chemistry in the band was nearly always askew, though, and by 1963 Taylor was essentially performing with whatever pickup band was at hand, always calling them the Playboys. A new single, "Memphis Tennessee" b/w "A Shot of Rhythm and Blues," appeared from the Barclay imprint early in 1964. Then things started to tumble into chaos as Taylor, his mind all but blown by acid, speed, and alcohol, became increasingly erratic both on-stage and off, even at one point declaring he was the biblical prophet Matthew -- all in front of a large audience at an important gig in London. It was to be the closest to the sun Taylor would ever get as a rock & roll star (although by proxy, as the model for Bowie's Ziggy Stardust, he enjoyed a sort of revival a decade or so later), and he became yet another erratic casualty of the 1960s drug scene, occasionally rising out of his confusion to give a good performance, but more often he was bafflingly incoherent and erratic on-stage. Taylor next, maybe not surprisingly, joined a religious movement, which hardly helped his rock & roll credentials. Still, he was much revered in Europe, and Eddie Barclay allowed Taylor to record intermittedly for his label and a few scatter-shot tours and shows were mounted in the '70s and '80s, but Taylor's career, at least as an effective cultural and creative force, never really survived the '60s. He spent his last years in Switzerland working as an airplane mechanic (he had gotten his pilot's license way back in high school in California) and he reportedly said that they were the happiest years of his life. He died on August 28, 1991 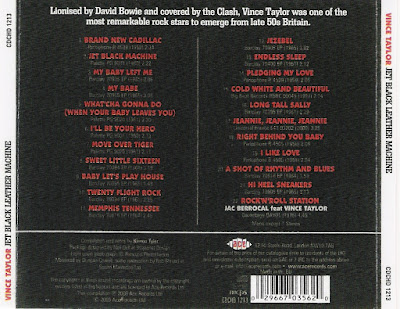 Vince Taylor is a legend of early British rock & roll. He wrote and recorded one of the few pre-Beatles U.K. rock songs that can be hailed as a legitimate classic ("Brand New Cadillac"), and also led a madly colorful life that saw him eventually gain stature as one of rock's earliest demented burnouts. For all his legend, however, there's never been a compilation that effectively gathered the best of his recorded output onto one disc -- until this one. Jet Black Leather Machine, finally, manages to cross-license the best and hardest-rocking of both his late-'50s British recordings and the early- to mid-'60s tracks he cut in France, all but one of these 21 tracks originating from 1958-1965. Does it live up to the legend of this manically energetic singer who tried to come off as a cross between Elvis Presley and Gene Vincent, as well as TO claim not quite genuine American origins (he did live there for a few years in the 1950s, but was born and raised in Britain)?

Yes and no, though any disappointment is negated by the surprising force and sheer enjoyability of most of this set. In all honesty, Taylor wasn't that great a singer, and though he did write "Jet Black Machine," most of his recorded repertoire was limited to American rock & roll covers that the original artists did better. Yet his lack of innate talent was compensated for by both an idiosyncratic, over the top enthusiasm -- a faint precursor, perhaps, to the many punk and post-punk singers who similarly didn't let a shortage of standard vocal chops stand in their way -- and some genuinely ripping backup musicians, even when he's accompanied by British ones in the late '50s. The menacing "Brand New Cadillac" alone would solidify his place in history, but he did manage a few other good sides that weren't American rock covers, most notably "Jet Black Machine." And even those covers of American rockers -- which do comprise well over half of this set -- usually pummeled along pretty hard, whether it be his 1958 debut single "I Like Love" (a Sun Records cover with a young, pre-Hamburg Tony Sheridan on guitar) or his 1965 version of "My Baby Left Me," which has some truly astonishing guitar leads that rank right up there with the most ferocious axework of the British Invasion. Bravo to Ace for intelligently selecting the best of this wayward British rock pioneer's highly erratic discography, complete with a fine career overview in Kieron Tyler's lengthy liner notes.
****