60`s Beat bands from Holland. 18 songs from the famous NEDERBEAT sounds of the time. Here`s some info we found on them: When the Beatles were conquering Holland, the Phantoms quickly jumped the bandwagon, playing all the hits the Fab Four made in The Netherlands. In june 1965, the group is invited by major record company Omega to release a single: Jack the ripper, a cover of British artist Screaming Lord Sutch which, incidentally had masterguitarist Ritchie Blackmore in its ranks at the time. The single sells excellent locally, but the acclaim is not nationwide. A couple of months later the band plays their new single, the James Brown cover I`ll go crazy on the tv-program `Nieuwe Oogst` and finally break through. The single is also released in Germany on the Metronome label. Then the band is invited for shows all the time and play together with acts like Adamo and Dave Berry. A couple of more singles follow, of which the self-penned Tormented will prove to be their biggest hit. In 1966 the Lp The Phantoms is released with half covers and half band-compositions. One of the best" Someday I`m somebody is written by famous Dutch rocker and songwriter Peter Koelewijn. Early 1967 most of the members are going to study and is the last single released: After tomorrow, a cover from the unknown London-based British band The Cockneys on the small Action label. In 1969 The Phantoms split up. Singer Martien van Rooy joins temporarily The Charlie Nederpelt Orchestra shortly, but is taking up his study again. In the eighteis and nineties a couple of reunion concerts took place in their hometown. 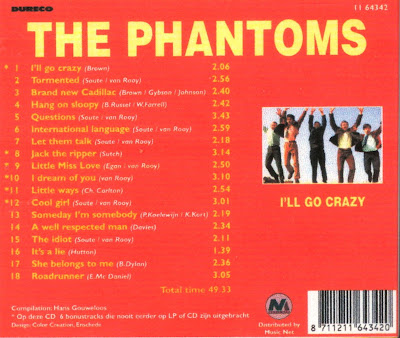