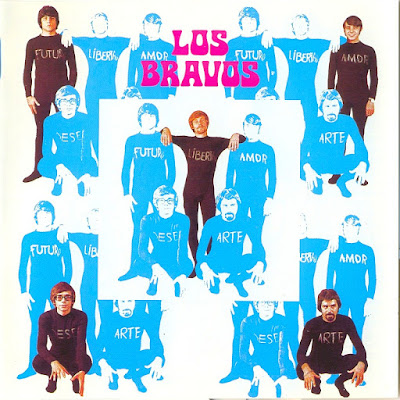 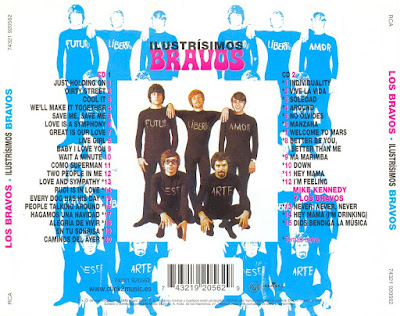 From Beatman:
Los Bravos - Ilustrismos Bravos (DeLuxe) (2CD 1969 2002)
Spanish band with English vocal from the '60s, known all over the world for their smash hit "Black Is Black." Album 'Ilustrisimos Bravos' recorded in London in 1968 with arrangements by Jean Bouchety, Ilustrisimos Bravos contains songs by Vanda-Young, Augusto Alguero, Reed-Mason and Manolo Diaz. The cover picture was taken by renowned photographer Alberto Schommer. In 1969, when Ilustrisimos Bravos was released, Spain's most international band had just split. At the end of 1968, producer Alain Milhaud, responsible for Los Bravos' success, announced at the Cafe Gijon in Madrid that singer Mike Kennedy was leaving the band to work as a solo artist. At the same public event, a lawyer turned up to declare that the group also wanted to part ways with Milhaud. It was a dramatic move that ended up in negotiations so that Los Bravos could keep the rights to the band's name and continue with another vocalist: Englishman Anthony Anderson, brother of Jon Anderson, by then frontman of Yes. The reason for this conflict was the fear that a Mike-less Bravos would be ignored by Barclay-Espana, Milhaud's production company. It's well known that the band members hardly participated in the recording sessions that took place in London, which were ruled by Milhaud's efficiency ideal, which involved using studio musicians instead. Thus, at the start of autumn 1968, when Ilustrisimos Bravos was recorded in London's Lansdowne Studios, only Mike Kennedy, guitarist Tony Martinez, and (according to some magazines) organ player Jesus Gluck were present. The musical director was a friend of Milhaud's, the great Jean Bouchety, responsible for many French pop hits and a recording artist under his own name. Bouchety even recorded an orchestral version of "Great Is Our Love," the song by Augusto Alguero included here. Ilustrisimos Bravos gathers pieces by the singer-songwriter Manolo Diaz translated into English (except "Como Superman," an outtake from the previous LP) with songs by established composers: Les Reed and Barry Manson, who had written hits for Tom Jones; Harry Vanda and George Young, from the Australian Easybeats, who penned the glorious "Bring A Little Lovin'"; Kenny Young and Scott English were New York songwriters, and "Save Me, Save Me" was the single released in Europe, while "Dirty Street" was chosen for the United States. However, the songs from Ilustrisimos Bravos only had some commercial success in Spain: their sound had probably gone out of fashion by 1969. The dream of keeping the worldwide impact of "Black Is Black" vanished. It would be more than 6 years before Mike Kennedy returned to front Los Bravos, and it wouldn't be a triumphant comeback. Pressed on 180 gram vinyl in a limited edition of 1,000 copies only. Awesome double CD re-released of the classic Beat Spanish album with many bonus tracks. Rare and out of print!
mp3-256kbps