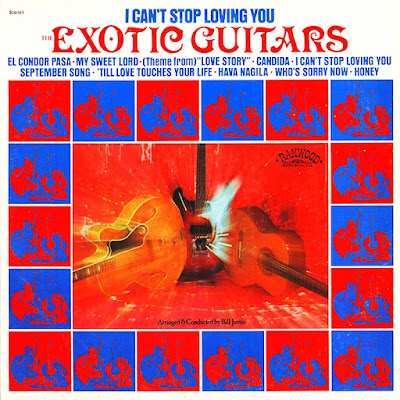 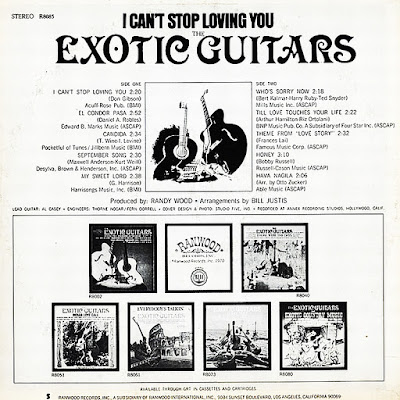 Fron Beatman:
The Exotic Guitars - I Can't Stop Loving You (1970)
Studio Project:
Lead Guitar - Al Casey,
Arrangements - by Bill Justis.
Al Casey- American rock 'n' roll guitarist - was a session's guitarist and played with many musicians as Duane Eddy, The Beach Boys and Everly Brothers, among others. In the early 1960s, Casey began working with his own ensemble, The Al Casey Combo.  In 1965, Casey moved to Los Angeles and became part of the group of session musicians which became known as 'The Wrecking Crew. He worked with this group for 18 years playing a variety of music styles including jazz, country, rock, and pop. As a member of "The Wrecking Crew", he worked for artists such as the Beach Boys, Phil Spector, Elvis Presley, Glen Campbell, the Association, the Monkees, Johnny Cash, Eddy Arnold, Simon & Garfunkel, the 5th Dimension, Harry Nilsson, the Partridge Family, Frank Sinatra, and Nancy Sinatra. During this time, Casey also worked for three years as a member of the band on The Dean Martin Show. In 2005, Casey was inducted into the Arizona Music Hall of Fame and was also inducted into the Rockabilly Hall of Fame.
(Not be confused with the jazz guitarist who played with Fats Waller, Al Casey.)
Bill Justis, Jr. was an American pioneer rock and roll musician, composer, and musical arranger, best known for his 1957 Grammy Hall of Fame song, "Raunchy."As a songwriter, he was also often credited as Bill Everette. He was eventually taken on by Sam Phillips at Sun Records where he recorded music for himself as well as arranged the music for Sun artists such as Jerry Lee Lewis, Roy Orbison, Johnny Cash, and Charlie Rich. In 1961, Justis moved to Nashville where he became a successful record producer and music arranger for both pop and country music performers at Monument and Mercury Records and other labels. He played saxophone on the soundtrack for the 1964 Elvis Presley film, Kissin' Cousins and that same year took over as manager of the singing group, Ronny & the Daytonas. In the early 1960s he also produced a successful series of instrumental albums on the Smash label - Alley Cat, Green Onions, Telstar, The Lonely Bull, also wrote the scores for several films...
mp3-320kbps