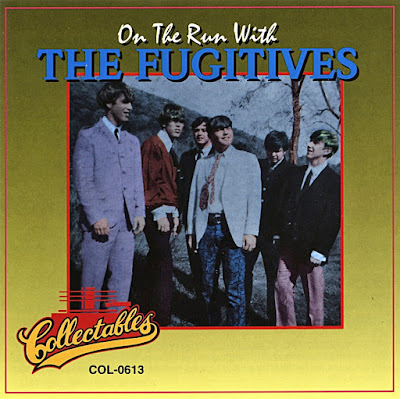 Fugitives paid "Justice Records" roughly $1,000 for four hours of studio time at "Justice Records"'s Winston-Salem Studios and the label pressed 500 or 1,000 copies of their "On The Run With The Fugitives".
In musical terms it isn't radically different from most of the "Justice Records" catalog.
But Fugitives were in top 5 of "Justice Records" catalog in terms of talent and enthusiasm.
First, overlooking a couple of the lame top-40 covers (a painfully out of tune "Until" and yet another needless cover of "Ebb Tide"), Fugitives plays with considerable enthusiasm which usually makes up for their limited technical skills.
Blown notes and off-key vocals abound, but on material such as "Turn On Your Love Light" and "Bo Diddley" it just sounds like these guys were having FUN.
The other winning factor is the album's high self-penned content.

Four of "On The Run With The Fugitives"' twelve selections are originals, with the roaring Fuzz-propelled title track "On The Run" (which was apparently intended as a never-to-be-released single), and "Kidding Around" standing out among the most impressive performances. 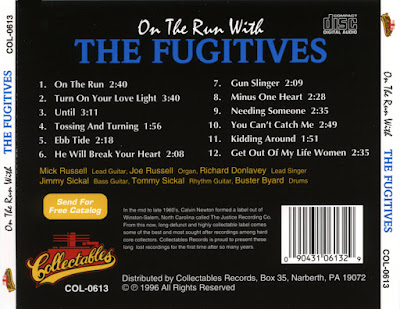