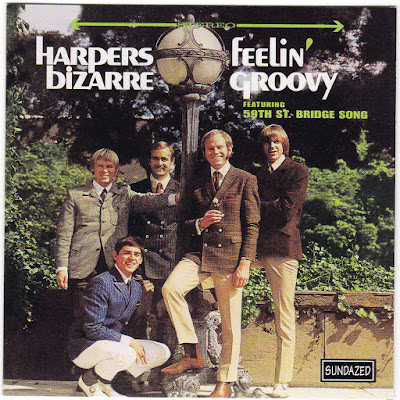 The eclectic pop group Harper's Bizarre was formed in Santa Cruz, CA, in 1963 by Ted Templeman (born October 24, 1944; Santa Cruz, CA) (vocals, drums, trumpet), Dickie Scoppettone (born July 5, 1945; Santa Cruz, CA) (guitar, vocals), Eddie James (born Santa Cruz, CA) (guitar, vocals), and Dick Yount (b. January 9, 1943) (guitar, bass, drums). John Peterson (b. January 8, 1945; San Francisco, CA) (drums) joined in 1966. After gaining attention as the surf-oriented Tikis in San Francisco, they were signed to Warner Bros. by producer Lenny Waronker, and they scored one of the sunniest hit singles of the 1967 Summer of Love with a version of Paul Simon's "The 59th Street Bridge Song (Feelin' Groovy)." Their brand of wistful, Roaring '20s pop enjoyed only a brief vogue, roughly from late 1966 to mid-1967, but they managed to get a few more minor chart singles -- notably Van Dyke Parks' "Come to the Sunshine" and covers of "Anything Goes" and "Chattanooga Choo Choo" -- and released four albums before disbanding in 1970. Templeman went on to become one of Warner Bros.' primary staff producers. As Time Goes By (1976) marked a partial reunion of the group.

One of the bands that came to Warner Bros. in their buyout of Autumn Records were the Tikis. They had only recorded a handful of singles, and in terms of musical direction and group identity, they definitely had potential. Enter producer Lenny Waronker and session musician/arranger/songwriter/general musical architect Van Dyke Parks. The two of them brought then-drummer Ted Templeman up to the front as co-lead vocalist, along with Dick Scoppettone, and created a soft-rock identity for the group, renaming them Harpers Bizarre. Their first single was perhaps their greatest shot: a cover of the then-brand new Paul Simon song, "Feelin' Groovy." Buttressed by an amazing Leon Russell arrangement and some great performances from the A-list of L.A. session cats, the song quickly went into the Top Ten. The resulting album is almost as great as the single, with songs by Van Dyke Parks ("Come to the Sunshine"), Randy Newman ("Debutante's Ball"), and others. An excellent and definitive slice of California soft pop. The 2001 CD reissue on Sundazed adds two bonus tracks, both taken from the 1966 "Bye, Bye, Bye"/"Lost My Love Today" single by the Tikis, the San Francisco group that evolved into Harper's Bizarre." 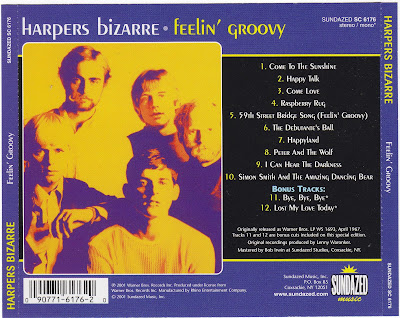