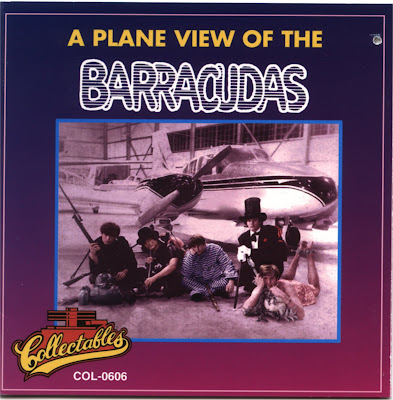 While they never attracted much attention and during their five year existence probably sold fewer albums than one of today's mid-sized acts sells in a day, The Barracudas stand as garage rock classics, making their sole 1967 album a sought after and prized collectable (and I'm not just sayng that since I own a copy ...)

Formed in 1964 in the Richmond, Virginia suburb of Highland Springs, the band started out as a six piece, but by early 1965 was down to a quintet consisting of keyboardist Butch Earnardt, rhythm guitarist Chris Layne, lead guitarist Mike Parker, bass player Sam Shaw and drummer Don Thurston. A steady stream of local dances and battle of the bands competitions began attracting a local audience and led Thurston's father to take an active role as band manager. By early 1966 the group had formed their own Cuda label, releasing the single 'I Can't Believe' b/w '20-75' (Cuda catalog number 1). While it did little in terms of sales, the single attracted the attention of producer/record label president Calvin Newton who wasted no time signing them to his Winston Salem based Justice Records.

1967 saw the release of their sole LP - "A Plane View of the Barracudas". In terms of content the set offered up a then-standard mixture of R&B oriented material (the frat band required 'Gloria') and more conventional pop-rock (a nifty cover of The Byrds' 'Feel a Whole Lot Better'). To his credit Newton generously allowed the band to include two original songs - 'I Can't Believe' and 'I'll Never Fall In Love Again' (two of the more impressive numbers). Musically most of the set was rather raw and rough, though enthusiastic performances such as 'I'm a Lover, not a Fighter', 'Not Fade Away' and an extended 'I'm a Man' (complete with some knock-your-socks-off fuzz leads), more than made up for other performance and production short comings. Among the few blatant missteps were a needless cover of Jr. Walker's 'Shot Gun' and a plodding take on The Beatles 'All My Lovin''. (In case you want to save some bucks, in 1995 the Collectables label reissued the collection in CD format under catalog number COL-606.) 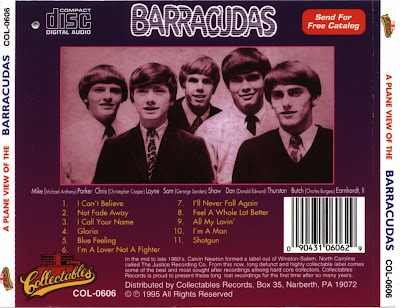