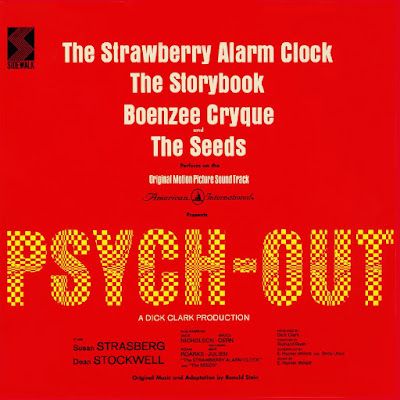 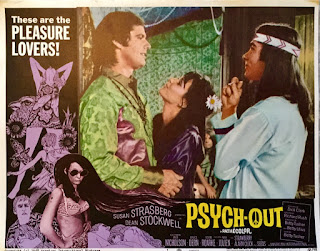 Released on the Sidewalk imprint of Tower Records, manufactured by Capitol, this is an excellent '60s album from a Dick Clark/American International motion picture, Psych Out. There is only one track from Sky Saxon's Seeds, and their "Two Fingers Pointing on You" sounds exactly like, you guessed it, "Pushin' Too Hard." The band made a career out of reinventing that one tune, and they do not disappoint here, lifted from their Future album on GNP Crescendo. Although the Storybook actually have a photo on the back cover, they appear to be a vehicle for Ronald Stein who is credited on this Dean Stockwell/Susan Strasberg film for "Original Music and Adaptation." The first tune on the disc is by the Storybook, written by S.A.Clock (Strawberry Alarm Clock). It sounds very much like the Alarm Clock's "Barefoot in Baltimore." "Rainy Day Mushroom People" and "The World's on Fire," a three-minute-and-thirty-one-second version, are Strawberry Alarm Clock's other contributions to side one; these songs are also on their album Incense & Peppermints. A longer version of "The World's on Fire" ends side two of this soundtrack. In between is one song by a band called Boenzee Cryque. That tune lists five songwriters, but it is actually a whacked-out version of Jimi Hendrix's "Purple Haze" with the stop from Vanilla Fudge's "You Keep Me Hanging On." Very '60s and, actually, quite fun, despite the fact the Boenzee Cryque track is the weakest cut on this surprisingly good disc. Four more tracks by the Storybook lead off side two. Titles like "Psych-Out Sanctorum," "Beads of Innocence," "The Love Children," and "Psych-Out" -- the third time the film title is used in the name of a song -- all sound like their titles suggest -- either clones of the Strawberry Alarm Clock or the Clock itself under an assumed name. The epic eight-minute-plus version of "The World's on Fire" by the Strawberry Alarm Clock kicks in to end it all. Despite the cheesey cover, this is a far more listenable record than, say, For Children of All Ages by Peanut Butter Conspiracy, and that was a band that took itself seriously. The genre calls for a bit of irreverence. Psych Out delivers that with studied enthusiasm.
1.The Pretty Song From Psych-Out (The Storybook)     3:15
2.Rainy Day Mushroom Pillow (The Strawberry Alarm Clock)     3:04
3.Two Fingers Pointing On You (The Seeds)     3:12
4.Ashbury Wednesday (Boenzee Cryque)     2:55
5.The World's On Fire (The Strawberry Alarm Clock)     3:30
6.Psych-out Sanctorum (The Storybook)     3:25
7.Beads Of Innocence (The Storybook)     3:10
8.The Love Children (The Storybook)     2:24
9.Psych-out (The Storybook)     2:17
10.The World's On Fire (Long Version) (The Strawberry Alarm Clock) 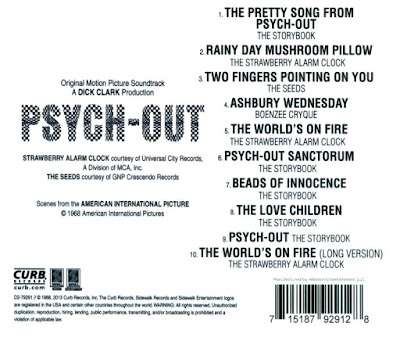