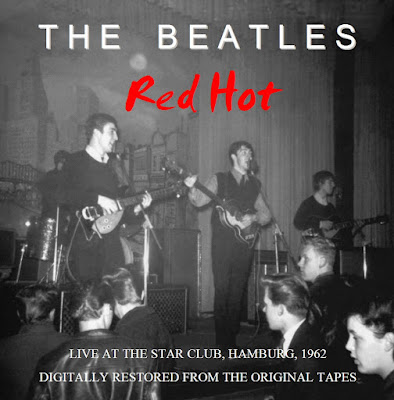 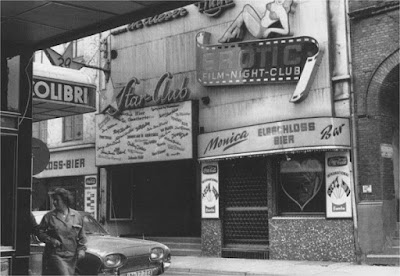 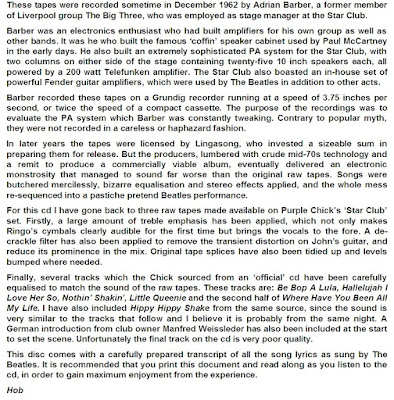 "...Ringo proves himself, as ever, to be the powerhouse of the band, the man who put the 'beat' in 'Beatles'. His drumming never flags for a moment, even with the maximum volume demanded by the club's dimensions. George turns in a succession of neat and inventive guitar solos, only occasionally painting himself into a corner (such as with the horrible, tuneless solo to track 26, 'I Saw Her Standing There'). Paul plays the MC and unleashes some incredible solo vocals, most of which are the clear favourites of the Hamburg audience. Curiously, his bass playing is somewhat muted, lingering mostly on root notes and rarely venturing into the melodic spaces for which he is known. Perhaps he was still perfecting his style, or perhaps he felt his efforts would be wasted on an audience who, in all probability, wouldn't have known a bass line from a washing line.


John, unsurprisingly, is the wild card in the pack. He does sound slightly more tipsy than the others, but one can assume that wouldn't have made too much difference to his performance. Clearly, he has no affection for the audience whatsoever, regarding them with disdain and frequently hurling insults at people (most of which were snipped out of the commercial release). He litters the endings of songs and the spaces in between with dischordant guitar noodling. Lyrics are altered to incorporate references to knickers, negroes and noses - all good stuff of legend. But rising above all this he proves himself to be (in the words of Horst Fascher) 'the greates rhythm guitarist ever'. Pumped up to maximum volume care of the in-house Fender guitar amps, he creates a perfect musical synergy with Ringo, churning out a driving rhythm that is pure rock and roll. If ever Chuck Berry had an apprentice, it was the young John Lennon.

When it comes to slow ballads, the group fares less well. Although the technical facilities at the club were world class for that time, they were still not up to the task of carrying over these gentle tunes to a large, barn-like venue. Paul makes a good job of 'Till There Was You', but is obstructed (in a good-humoured way) by John parotting the words to the song in a silly voice. Other ballads, like 'To Know Her Is To Love Her', sound clumsy and out of tune. And yet there is still an indefinable quality to the music. When John, his voice weary and hoarse from the long hours at the mic, tackles Arthur Alexander's 'Where Have You Been All My Life?' the hairs on the back of one's neck begin to prickle. Though the sound balance is poor, the harmonies patchy and the tempo unsure, the group somehow transform an innoffensive teen ballad into a minor work of art. The sound is crude, but the performance is mythic. The group are stamped with the mark of future greatness.

And when the songs end, The Beatles go back to talking amongst themselves. The audience, only half aware of the miracle they've just witnessed, slurp at their drinks or wander off to take a piss, while the world's greatest band plays on in the background. And that is the magic and charm of the Star Club tapes - the paradox of greatness in an utterlly mundane setting...." 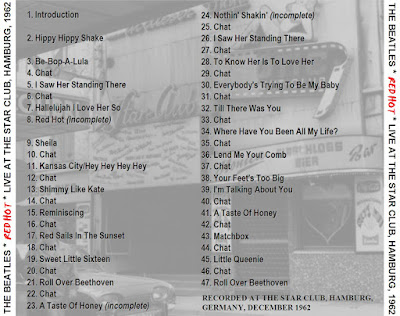