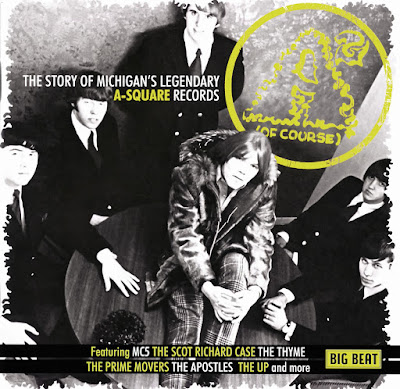 Michigan had one of the most vital rock & roll scenes of the 1960s, and while many of the best known Michigan bands came from the psychedelic-era movement that centered around Detroit's Grande Ballroom (most notably the MC5 and the Stooges), there was already a thriving rock scene going back to the early years of the decade, and one of the great movers and shakers in Michigan rock was a guy named Jeep Holland. Based in Ann Arbor, Holland managed one of the city's best record stores, booked bands, and launched a record label, A Square Records, that released classic sides from some of the area's most notable bands. A-Square (Of Course) is a fine and long-overdue retrospective of material from the A Square vaults, though the disc cheats a bit as a label overview. Instead of simply collecting A Square releases, compiler Alec Palao has also included material from a number of acts that Holland booked and managed, and while this gives a broader picture of the Ann Arbor/Detroit music scene in the mid-'60s (as well as a more detailed look at the sort of music Holland championed), if you're looking for an accurate history of the A Square label, some of the music here will throw you off the trail. And perhaps the best and best-known tracks on here, "Looking At You" and "Borderline" by the MC5, weren't really released by A Square -- the band's manager, John Sinclair, simply put the label's name and logo on their self-released single! But these minor gripes aside, this is a great sampler of top-notch mid-'60s rock & roll with the classic Michigan sound and feel. The Scot Richard Case (who later evolved into SRC) are represented with five songs, and while they weren't much on original material (the spooky "Who Is That Girl" is the only group-penned tune here), Scott Richardson was one of the best vocalists on the scene and their covers of "Get the Picture," "Midnight to Six Man" and "I'm So Glad" rock convincingly. The Thyme land a whopping eight songs on this collection, and while they weren't quite so remarkable to merit so much attention here, they had a sure hand for folk-rock (not a common thing in Michigan at the time) and "Window Song," "Love to Love" and "Very Last Day" are fine stuff. Dick Wagner, who later went on to star status backing up Alice Cooper and Lou Reed, is represented with three tunes by his early group the Bossmen (most notably a solid psych-tinged ballad "Listen My Girl") as well as a version of the Frost's "Mystery Man" that predated their speaker-shattering debut album Frost Music. James Osterberg, a year away from changing his name to Iggy Pop and forming the Stooges, handles both drums and vocals on the Prime Movers' raw reworking of "I'm a Man," and the Up's "Just Like an Aborigine" is nearly as good a summation of the White Panther Party ethos as anything the MC5 ever waxed. Anyone with a taste for mid-'60s rock will find plenty of buried treasure on A-Square (Of Course), and it's a must for anyone interested in the history of Midwest music. 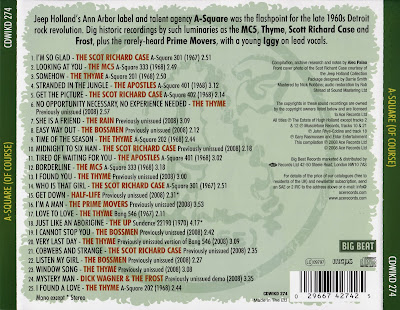