The Fenmen made just four rare singles under their own name in 1964-1966, but were notable players in the British Invasion on a couple of counts. At the beginning of their recording career, they operated as the backup group in Bern Elliot & the Fenmen, who had U.K. hits in 1963 and 1964 with covers of "Money" and "New Orleans." Not long after their final single, two of their members became key components of the psychedelic lineup of the Pretty Things. Their meager recording legacy as a self-contained outfit shows them to be a good vocal harmony group strongly influenced by American stars the Four Seasons and the Beach Boys, though they didn't start to record original material until shortly before they broke up. 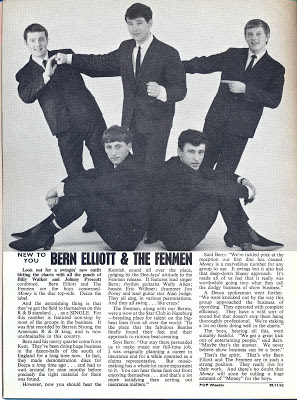 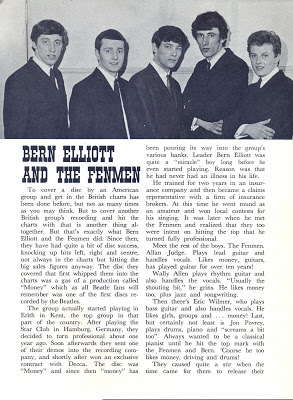 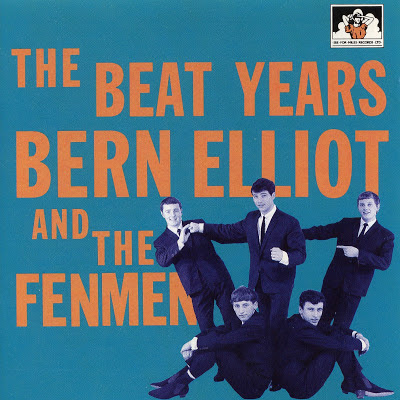 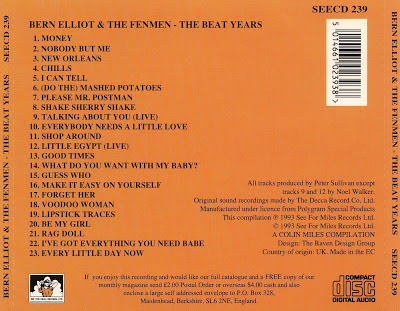 Money by Bern Elliott & The Fenmen was written by Janie Bradford, Berry Gordy and was first released by Barrett Strong in 1959

"Money" was a staple of the set of most British Invasion bands. Oddly, the only group to have a U.K. hit single with the song was the obscure one-shot outfit Bern Elliot & the Fenmen. Elliot's version entered the British Top Twenty near the end of 1963; it wasn't a patch on the Beatles' rendition (which had been released at about the same time on their second LP), but it was actually a pretty decent, soulful interpretation. Elliot and his backup group played in a sort of tough Merseybeat style (although they weren't from the Mersey), and Bern was a pretty decent R&B-influenced singer, somewhat along the lines of the Dave Clark Five's Mike Smith. Elliot & the Fenmen made a few singles and an EP without any more notable success; their reliance upon old R&B/rock tunes for the entirety of their repertoire made them almost instantly passe, although the songs were executed pretty well. Elliot fell out with the Fenmen in 1964, and briefly teamed up with the Klan, as well as putting out some orchestrated pop solo singles in 1965. the Fenmen went on their own and made a few singles for Decca and CBS in a harmony pop/rock style, highlighted by the original minor-keyed tune "Rejected." After the demise of the Fenmen, members Wally Allen and John Povey joined the Pretty Things, in time for that group's psychedelic recordings. 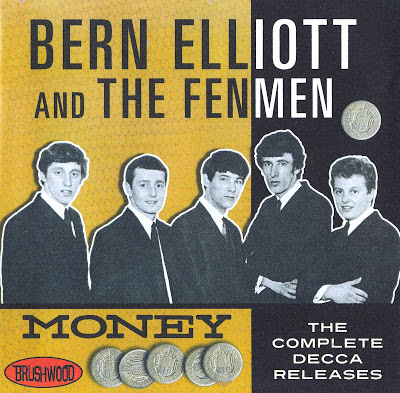 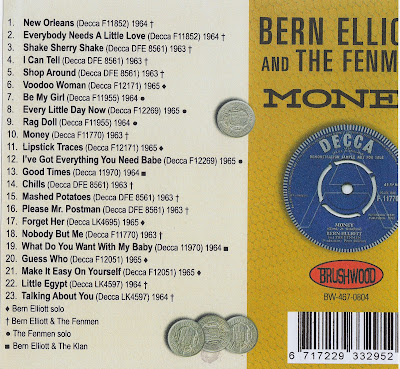