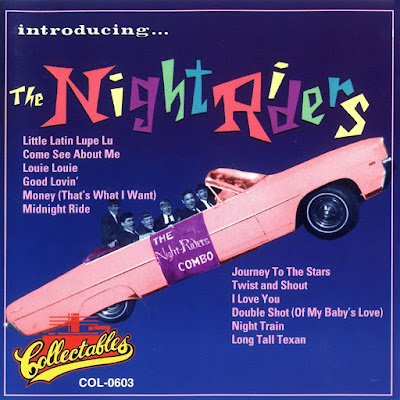 Based on the surviving evidence, the Night Riders were likely among of the most talented of all the overlooked southern garage bands of the middle-late 1960's. They were also one of the more unusual, a sextet with two lead instruments (guitar, organ) and a pair of good rhythm guitarists that gave their sound a thick, melodious texture. Monte Allison (organ, vocals), Jon (Twogun) Johnson (drums, vocals), Steve Rogers (bass, drums), Mac Lewis (rhythm guitar, vocals), Ray Atwater (rhythm guitar, vocals), and David Marlette (lead guitar, lead vocals) were in their mid-teens when they began playing together in the mid-1960's. Their repertory consisted of the usual rock 'n roll and r&b standards ("Louie Louie, " "Good Lovin', " "Twist And Shout, " "Money") spiced with some fair originals that were written in a similar vein. Monte Allison's keyboards were often the lead instrument and dominated the group's sound, sometimes even giving forth with Joe Meek-like arpeggios-sharing the spotlight on the breaks was David Marlette's lead guitar, and at least one of the other two guitarists could also solo when the need arose ("Night Train"). Their playing was unusually precise and articulate for a garage band, indicating that they'd either taken some music lessons somewhere along the line or spent a LOT of time practicing, but whatever the reason, it greatly helped the Night Riders when it was time to record. What happened to them is anyone's guess. 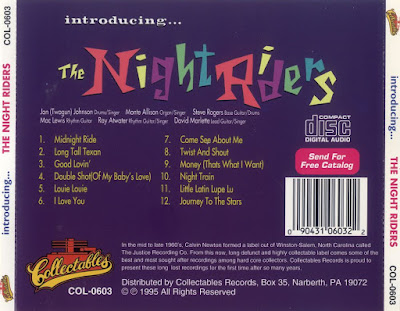 One of the better garage rock recordings of its period, the dozen songs here, cut for Justice Records after the band had placed in the second runner-up spot in a local Battle of the Bands, are full of surprises. For starters, the presence of two rhythm guitarists gives the group a rich, thick-textured sound. The other big surprise is the balance struck between the organist and lead guitarist: Monte Allison and David Marlette make a perfect team of soloists. Allison's organ shifts effortlessly from background to foreground, and Marlette's guitar solos show an engaging, inventive sense of melody. The presence of a handful of very pleasing original numbers only enhances the value of this CD. Excellent sound, too.

Email ThisBlogThis!Share to TwitterShare to FacebookShare to Pinterest
tags 60s, Collectables, Garage, The Night Riders, US