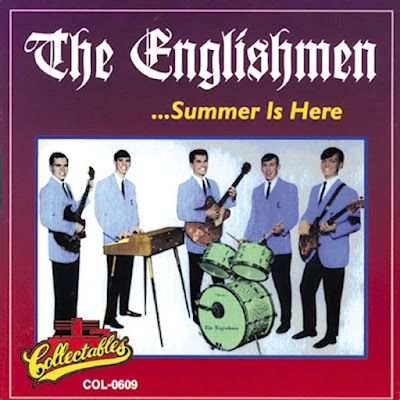 There's no telling exactly where the Englishmen hailed from, although it's an almost certain bet that it wasn't from England or any points outside the United States. Apart from the fact that they were signed to Calvin Newton's Justice Records label in Winston-Salem, NC -- which sort of indicates a base of operations for the band somewhere around the Mason-Dixon Line -- they also didn't sound terribly English. Wherever they originated, the band left behind one LP's worth of songs, all done in a solid garage band vein of the period, including an enthusiastic (almost "Louie Louie"-style) rendition of "96 Tears" and a classy and restrained instrumental version of "The Girl From Ipanema." Singer/guitarist John Workman, then 27, was the group's leader, Tommy Howard was their lead guitarist, Warren Daniels made bass and sang backup, Tommy Medlin played the organ and sang backup as well as handling incidental percussion, and 16-year-old Ronnie Wheeler was their drummer, who proved his worth on that same rendition of "96 Tears," as well as his extended solo on "Penetration." As singers, they weren't much, either of style or intonation, though for ? & the Mysterians hit or their cover of "Long Tall Texan," they didn't need to be, either (at least in the intonation department). On "Yes I'm Ready" and "Summer Is Here," they did need some help to bring out whatever worth the songs had. They were a solid instrumental outfit, however, romping and stomping through their own "The Englishmen Theme" (a kind of Bo Diddley meets Dick Dale piece with some very animated drumming), and turning in surprisingly elegant versions of "The Girl From Ipanema," "(Ghost) Riders in the Sky," and "Unchained Melody." 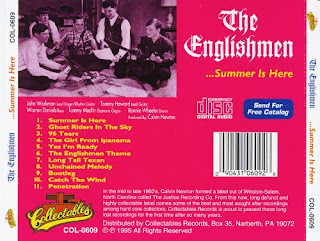 Summer Is Here is a surprisingly strong album from the vaults of Justice Records in North Carolina, showcasing this quintet in generally fine style, with not only a raucous "96 Tears" but a handful of eloquent yet nicely rocking instrumentals. Mostly the guitars (courtesy of Tommy Howard and John Workman) are in the spotlight, though organist Tommy Medlin also gets to step into the spotlight. Vocally, they do best on the real garage rock classics, although "Catch the Wind" also comes out decently, their harmonies kind of meshing in ways that they don't elsewhere, and it might've made a good single if they'd done the song at a slightly faster tempo. The recording quality is also above average for this tape library, and these boys were at least worth checking out on a Saturday night back in 1966, which makes them worth a listen or two today as well.