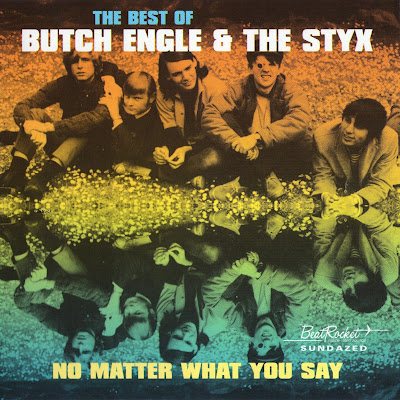 Butch Engle & the Styx were a very minor mid-'60s San Francisco Bay Area band that issued just three singles (the first, in 1964, under the name the Showmen). They played moody garage-folk-rock with a similarity to the Beau Brummels that was not coincidence: all of their material, except for the Showmen single, was written or co-written by Ron Elliott of the Beau Brummels. the Beau Brummels were a fine group, and Elliott was an excellent songwriter. But the compositions Butch Engle & the Styx were granted access to were weak by Elliott's own high standards and in fact were basically leftovers that were not deemed strong enough for the Beau Brummels to record. As Engle himself recalled in the liner notes to The Best of Butch Engle & the Styx: No Matter What You Say, "Ron, Sly Stewart, [and Autumn record executives] Tom Donahue and Bobby Mitchell would choose which songs would go on [a Beau Brummels] album, and then we could take what we wanted from whatever was left."

This has a pretty funny title, considering that the group only put out three singles (one of them under a different name) and never had anything close to a hit. A better title might have been "The Entirety of Butch Engle & the Styx," since it's difficult to imagine that any more material could have been retrieved than appears on this CD. In addition to both sides of the three singles (the first done in 1964 when they were still called the Showmen), this also includes 11 previously unreleased tracks, including some alternatives and multiples. The unwary might initially dismiss this as a subpar, more garagey Beau Brummels, a comparison that becomes even more valid upon the discovery that Beau Brummels songwriter Ron Elliott wrote or co-wrote everything except the Showmen single. To be brutal, Elliott was wise to cast off most of these instead of recording them with the Beau Brummels. The songs just aren't nearly on the level of his usually excellent efforts for his own band, although they have some similar trademarks (particularly the minor-based melodies and moodiness). Butch Engle & the Styx were lesser musicians and singers than the Beau Brummels, too, although they were OK, adding some cheesy garage organ that you'd never find on Beau Brummels sessions. "Hey, I'm Lost," which was one of the singles (and appears along with two alternate versions of the same tune), was just about their best moment: a charging, slightly ominous and doubtful number with good vocal harmonies. This is certainly worth getting for major fans of the Beau Brummels, as none of these songs were actually recorded by that group. As a '60s garage record, though, No Matter What You Say is average, even unremarkable. 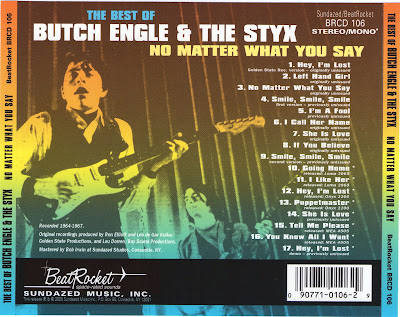