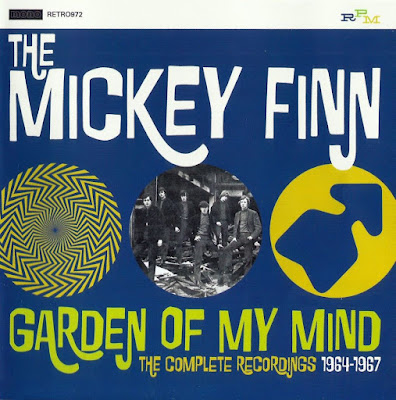 
The Mickey Finn traveled in the same circles as The Rolling Stones and The Pretty Things, but despite some very close calls, the band never hit the big time.  Garden of My Mind: The Complete Recordings collects The Mickey Finn’s 1964-1967 Blue Beat, Oriole, Columbia, Polydor and Direction singles along with previously unreleased demo recordings to paint a full portrait of the cult-favorite band.

The story of The Mickey Finn began in the U.K. circa 1962 when guitarist Mickey Waller joined with drummer Richard Brand in The Strangers.  By 1963, Waller and Brand had teamed with bassist John Burkett, vocalist Alan Mark and keyboardist John “Fluff Cooke” as Mickey Finn and The Blue Men.  Under this moniker, the group released a trio of singles, all included here: “Tom Hark” b/w “Please Love Me” on Blue Beat, and “Pills” b/w “Hush Your Mouth” and “Reelin’ and A’ Rockin'” b/w “I Still Want You” on Oriole.  These singles established the band’s “bluebeat” sound and featured choice contributions from friend Jimmy Page – not on guitar, but on harmonica!  Page also joined the band for some onstage gigs.

As 1964 ended, John Burkett departed the group and was replaced by Mick Stannard.  Columbia signed Porgy and Bess showstopper “It Ain’t Necessarily So.”  (Ironically, the character who sings that song in the original musical-folk opera is named Sporting Life!)  The recording is included here along with “God Bless the Child,” as both tracks later saw release on Talmy’s Orbit label.  Two more demos from this period, “Stagger Lee” and “Poverty,” debut on this collection.

the group with its newly-stripped down moniker of Mickey Finn for one single produced by Shel Talmy, “The Sporting Life” b/w “Night Comes Down.”  Both sides were co-written by Talmy, and it’s a possibility that Jimmy Page played guitar on these sessions per Alan Mark in the liner notes.  Talmy recorded other tracks with the band that didn’t see release at the time, including a version of George and Ira Gershwin and DuBose Heyward’s
As The Mickey Finn, the band released its next 45 on Polydor in 1966: a cover of Billy Stewart’s “I Do Love You” b/w Pam Sawyer and Lori Burton’s ballad “If I Had You Baby.”  Mick Stannard was next to leave the group, and he was replaced first by Rod Clark and then by Bernie Jory.  Demos from this transitional period are included here, as is The Mickey Finn’s next (and final) single, for CBS’ Direction label in 1967.  The original song “Garden of My Mind,” written by Finn, Mark and Jory, was backed on 45 by “Time to Start Loving You,” credited to all five members.  Richard Gottehrer (“My Boyfriend’s Back,” “I Want Candy”) produced this single, which should have established the band as a top-flight purveyor of freakbeat/psychedelia.

The Mickey Finn continued to perform and tour through 1968 before its members called it a day, but RPM’s new release shows the group as a potent might-have-been with a small if strong legacy of great music.  Garden of My Mind: The Complete Recordings presents these recordings in non-chronological sequence.  It has been remastered by Simon Murphy and features liner notes by Brian Neavyn based on his interviews with the band members for Ugly Things magazine.

Garden Of My Mind:  The Complete Recordings 1964-1967 is the collection album by The Mickey Finn, was released on November 20, 2015 by RPM, featuring Jimmy Page (Guitar), includes the best known single "Garden Of My Mind" and "I Do Love You" and more!. 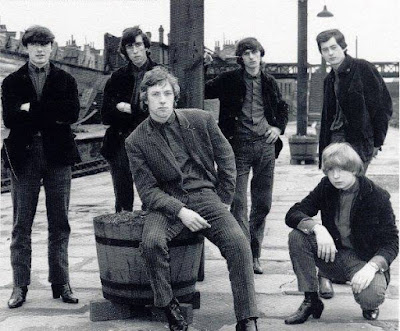 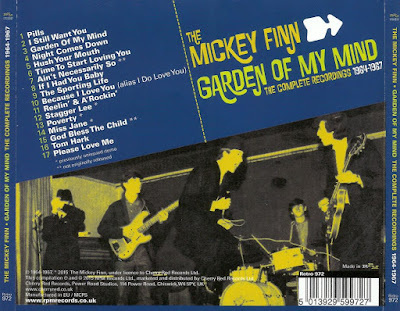