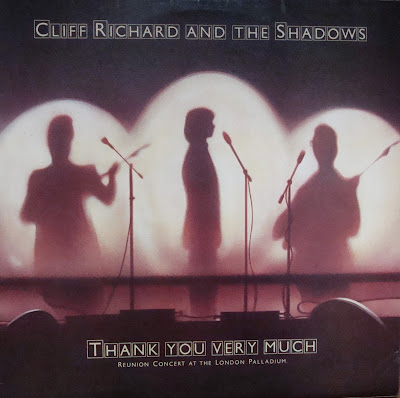 Recorded at the London Palladium on March 4, 1978, this live concert release is one of the most appealing and rewarding of all post-'60s Cliff Richard releases as a career overview as a well as a performance document, and one of the best Shadows releases of the late '70s. On vinyl, it was a choice import for much of the first half of the '80s, although the CD version has been much more difficult to find. Reuniting Richard with guitarists Hank Marvin and Bruce Welch for a 20th anniversary commemorative concert, Richard and the Shadows perform a selection of their best-known songs across the decades -- for the band these include the instrumentals "Apache," "Shadoogie," "Atlantis," and "Nivram," while Richard performs "Move It," "The Young Ones" (with a surprisingly effective electronic keyboard accompaniment in lieu of the strings used in the original), "Willie and the Hand Jive," "Do You Wanna Dance," "The Day I Met Marie," and "Devil Woman." Richard is in fine voice and Hank Marvin and Bruce Welch are both in stunning form throughout, Marvin's fiery yet clean and tasteful leads and Welch's melodic yet powerfully propulsive rhythm guitar (supported by Brian Bennett's drumming) drawing the listener in and adding just enough that's new to the material to make it worth adding to one's collection. One does wish that there was some more annotation about the event or the full personnel, but as pure music this is a first-rate release, whose only frustrating point is its length -- when it was on vinyl, the hourlong show was mastered at a very low volume, whereas on CD (paired with Richard's Green Light album) one wishes it ran longer. Indeed, the only real question is whether the 15 songs here were all that was performed at this show -- and also, while we're at it, what became of the video that was shot simultaneously with the recording. But regardless, this CD is a keeper, not just for Cliff Richard or Shadows fans, but for anyone who wants to hear what pre-Beatles British rock & roll at its best could sound like. 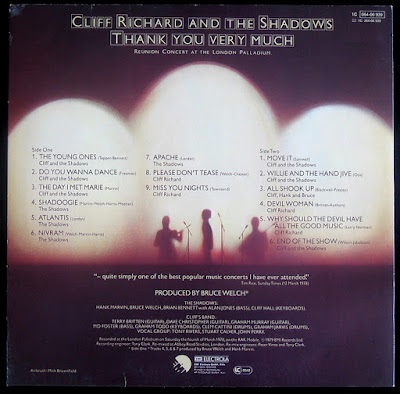